We’ve been waiting for a clear day to tackle The Peak and *little dance of joy* here it is! Actual blue sky and visibility for miles. Our morning view offers up this!

We have local intel that the best route up is the number 15 bus, offering far more to see than the funicular tram, then taking the tram back down. Works for me – as a bonus the bus stop is right next to the Star Ferry landing point.

Freed from office walls, it’s quite fascinating to experience the impact weather has on one’s mood. Under the sun’s influence, even the humidity has lifted a little. That alone is enough to have me skipping along.

From an overwhelming start, I’ve come to love Hong Kong, its secrets slowly unfolding. It’s sad to think this will be one of our last crossings. It’s an excellent service, the Star Ferry: efficient and cheap but with one of the best views in town.

Our peak bus driver, meanwhile, deserves an award for bravery. I thought Himself was fearless (and indeed he is) but this guy is something else. Once we’re past the snarl of the city, he tears up the peak road, a tiny, winding affair, the bus millimetres from rock face most of the way. From my window seat I can feel the vegetation scraping our side. Nerves of steel. It’s true, the bus does offer tantalising glimpses of the view on the journey up

and we get to see a little more of Central too. Excitingly, we also see Hong Kong island’s south side, a lushly green, many islanded inlet.

It looks gorgeous, which leaves me longing for more time. And we haven’t even contemplated Lantau or Macau. Clearly, another visit is on the cards.

The Peak is looking magnificent – our wait for a clear day has paid off. I’m itching to explore, but Himself has to be fed first. You’ll not be surprised that we select a restaurant with a view…or perhaps that they don’t offer yum cha! Pizza it is.

Although to be fair, the logistics of dim sum restaurant supplies being carted uphill would be prohibitive.

Finally, we’re free to explore. There are two options. The first, a walking path with viewing platforms.

From here, views are across the harbour.

There’s a second option, higher up, from a purpose built viewing tower, where views are 360° – across the harbour and southside.

We do both, obviously. My reasoning being the same as for mountainous cable car rides – you don’t come all this way and not go to the top!

Beneath us, our one dimensional map of Hong Kong is brought to life. Surrounded by hills, black kites soaring overhead, skyscrapers as far as the eye can see, fringed by waters blue, it’s truly one of the world’s spectacular city views.

I snap away happily until Himself calls time.

The tram ride down is a steep decline that takes moments.

I wonder at the backward seat orientation, until we commence the descent. Had they faced the other direction, passengers would immediately fall out.

The walk back to the ferry reveals more of Central.

Home to big business, their brightly displayed names immediately familiar. There’s a little history too, with the ominously named Court of Final Appeal. 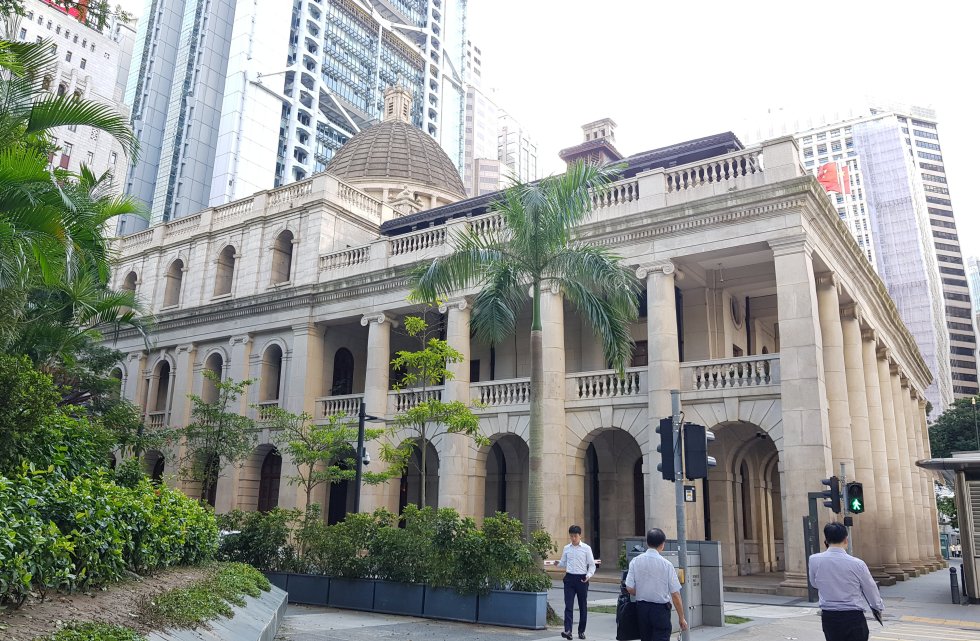 Back across the harbour,

we find another Colonial gem (that’s an enormous music box out front) and snippets of Hong Kong’s fire fighting history.

I don’t think that little firetruck would have stood much chance once skyscrapers took hold.

I had hoped to make it to the 103rd floor Ritz-Carlton cocktail lounge, a tip from my brother-in-law. Coincidently, it’s the bunny building of yesterday’s video. But despite it being “just over there”, it’s a 5km hike. A motorway in the way, I suspect. Instead we head back to the Sheraton, Himself’s brother-in-law’s tip. Very useful people, brothers-in-law!

It’s a late afternoon view this time, no less the lovely.

That’s followed by yet more drinks at our roof top bar, under a magnificent purple sky. The bunny’s back too. 🐇♥️

Bereft of his own wine stock, Himself’s almost become a creature of the night. I might just have discovered a secret weapon to coax him out….

It’s our last night in Hong Kong. *Sigh* I’m going to miss it.