London! We’re back! In an unexpected twist, we’ll manage two London visits in one trip. Nothing to complain about there. It’s officially the first day of Autumn too, but far from forecast rain, the skies look clear.

We’re off to explore the Victoria and Albert Museum, the V&A. A friend introduced me to it years ago, dazzling me with its divine jewellery gallery – it’s been on my list for a further exploration for years.

But not before a yum cha lunch. Amusingly, having followed our “Where Chefs Eat” book recommendation, it’s guided us back to the same restaurant we chose earlier this trip. It’s excellent of course, whetting my appetite for Hong Kong. I’ve eaten some fabulously good food in my time, but if I had to pick a last meal, it would probably be a yum cha.

The V&A was opened in 1892. Named for Queen Victoria and Prince Albert, it’s the world’s largest musuem of applied and decorative arts, design and sculpture. Set over 145 galleries housing over 2.2 million objects, there’s no shortage of things to see. It’s a beautiful building too, inside and out. 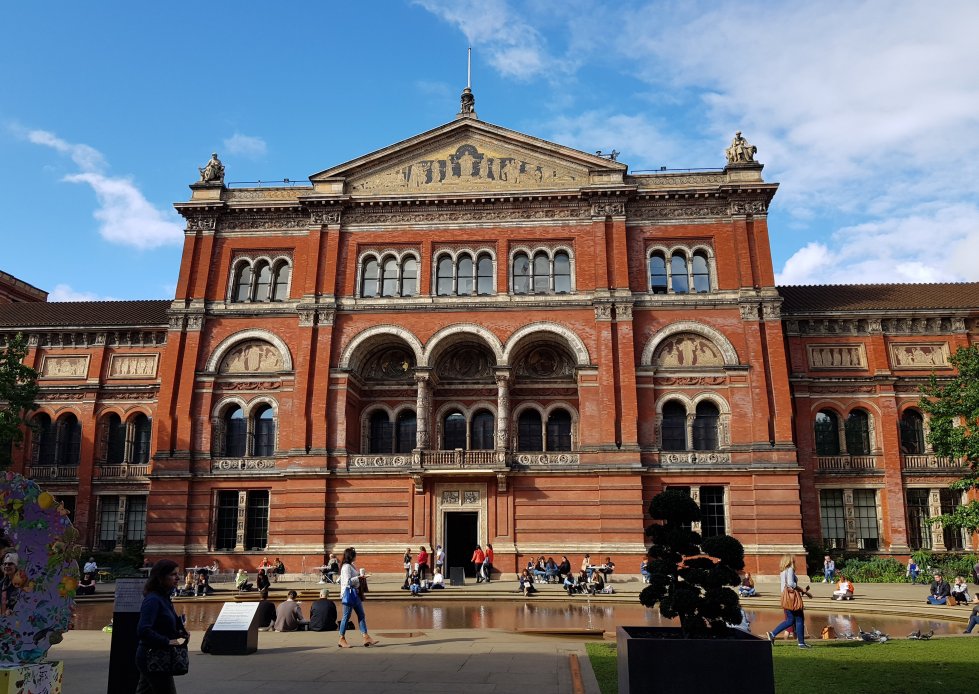 We wander though the Asian displays.

I’m particularly taken with the inro containers used in lieu of pockets on kimonos, and the clasps that attach them. The mouse!

There’s sculpture, including an impressive replica David and Pandora, wondering just what’s inside that box…

We see old and new photography,

and a display of fashion through the ages. That whalebone corset… ouch!

There’s a magnificent silver room, with replica silver lions that guard the throne in a Danish castle (which incidentally, we’ve been to)

and of course the jewellery gallery where I find approximately eleventy six items I’d dearly love.

The glamour! The sparkle! It’s quite the challenge to step away. It takes Himself several attempts to lure me out.

On the way out, we encounter extraordinary building design, replicated in the Victorian era, when travel wasn’t available to everyone.

Even with all we’ve seen, I suspect we’ve only scratched the surface of what’s on offer.

We set out for home, but I can’t resist photographing the Musuem of Natural History, just next door – yet another stunning building.

Much pleading gets me a glimpse inside. I drag a somewhat reluctant Himself through the dinosaur wing,

and to a rather spectacular, enormous, moon exhibit, built in likeness from NASA images. The first image is the mysterious dark side of the moon – it’s fascinating.

It seems the Musuem of Natural History is yet another place I need to come back to and explore thoroughly. What a wonderful resource the Londoners have in their museums – they’re very lucky.