Well, we’re back in the UK, spinning our wheels until Monday, until the motorhome workshop appointment.

It’s taking a moment to recalibrate. Himself is keeping up a steady chant of “keep to the left” while I experience a moment’s panic at each roundabout. It really is quite extraordinary how quickly driving on the right becomes the norm.

The workshop is in Woking, so we’re staying put in Portsmouth for the day, exploring an area we’ve only used as a ferry exit point in the past. Google conveniently navigates us in to Old Portsmouth by bus, and off we set.

With its natural habour Portsmouth has been used as a strategic defence point since Roman times. Porchester Castle originated from this time, built as the harbour’s first defence.

We’re on the opposite shore today, where defences date back to the 1400s. And it’s busy! In between the multiple ferries to various ports in France, Isle of Wight, the Channel Islands, pleasure craft, police vessels and a hovercraft, there’s a permanent stream of activity up, down and across the harbour.

We see the HMS Warrior (built in 1860), a Navy armoured frigate,

the Square Tower, built in 1494 by order of Henry VII, now a popular wedding venue – note the emerging bride,

and a little further along, the earlier (1415 – 1422) Round Tower, which has borne witness to 600 years of naval history from the sinking of the Mary Rose under French attack in Henry VIII’s time to the return of the Falkland’s war fleet.

Both towers are completely intact, offering great views across the harbour.

The Round Tower sits at the edge of Old Portsmouth, cobblestoned with many nauticaly themed pubs.

and my burger extravaganza

there’s enough food for a few French meals. Delicious, even if it does take the rest of the day to walk it off.

Continuing our harbour tour post lunch, we walk along the Millennium Promenade, which stretches from the historic dockyard to Southsea Castle. It’s a good long walk (much needed post lunch) with landmarks along the way.

We see the Isle of Wight hovercraft landing on shore and taking off again in a great spray of stone and water. It’s suprisingly exciting, seeing it beach itself, deflate, then inflate, seemingly by magic, coming to life for take off.

Further along is the Portsmouth Naval Monument, dedicated to the 24,000+ unrecovered Navy personnel, lost at sea.

There are cheeky young gulls taking a rest from the busy business of being a sea bird,

sculpture highlighting the plight of our littered oceans,

and eventually, Southsea Castle itself.

The Castle was built with unprecedented speed on Henry VIII’s order. Having defied the Church to divorce his first wife, the King feared attack from the Catholic strongholds, France, Italy and Spain. In preparation for likely attacks Henry built a series of strategic defence castles on England’s southern shores, spending almost £400M in today’s equivalent money. Southsea was amongst the first of these. It wasn’t finished a moment to soon either, defending a massive attack from France, months after completion.

The castle underwent changes through the centuries, adding land banks around it (making it a smaller target from the sea) and increasing its height (the red brick additions). The Castle is its own Musuem, explaining its timeline.

Behind the Castle is a Museum dedicated to the D-Day story. Himself does the tour, while I amuse myself admiring the 75th anniversary commemorative garden, featuring topiary D-Day beach landing code names. It’s very precise work.

The Castle and Museum are the furthest point in our meanderings. On the way home, we pop into the Portsmouth Cathedral, known as the “cathedral of the sea”. Instead of the cross one would expect to see, it’s topped with a ship! There’s a replica inside. 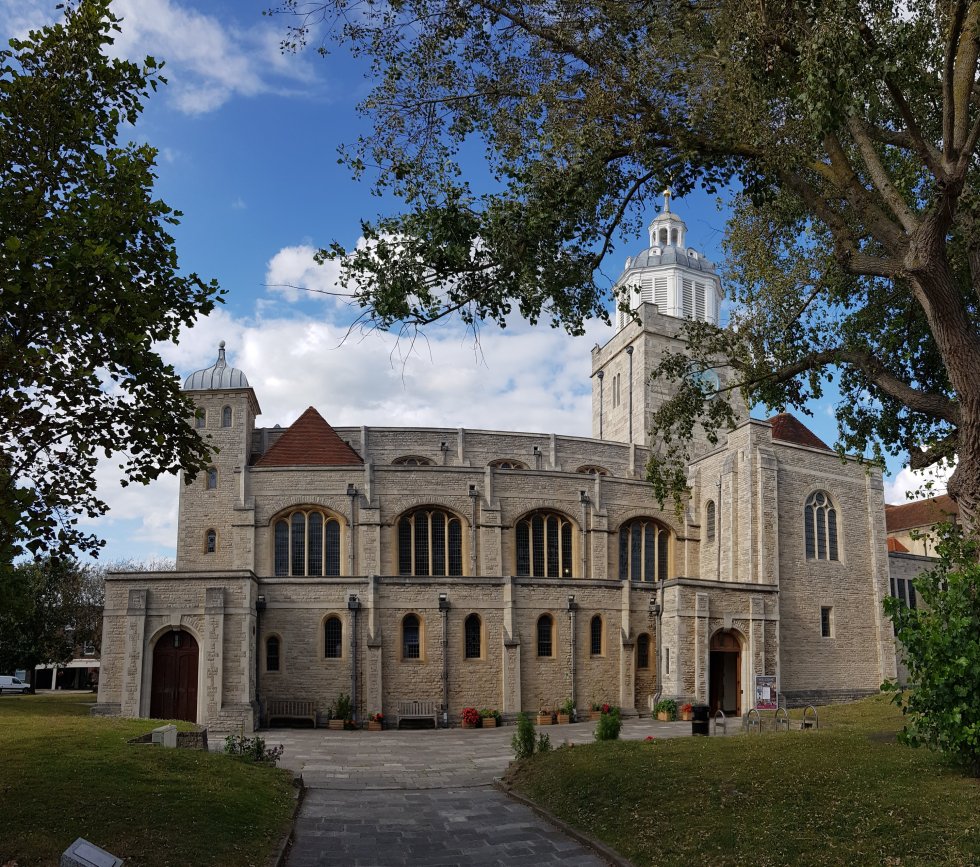 The Cathedral is older than it looks, with a history dating back to 1180.

The day’s last sight is the Spinnaker Tower, a three level viewing platform that’s far too high for me to even think about contemplating.

Oh, and Himself finds a whale!

Having successfully found our way back to the bus then home, we wander to the harbour, make friends with some fish

and just to end the day with a bang, I miss a gutter and bang my knees up. Much ouch. At least my phone doesn’t incur any further damage. It’s a small consolation, but I’ll take it.