Our third day in Prague sees us explore Prague’s 5th incarnation, the Nove Mesto, (the New City) established in 1348 by Charles IV, he of the very fancy bridge. How could you not fall in love a city where the “new city” dates back to the 14th century? The Nove Mesto is twice the size of the Stare Mesto, so there’s a lot of ground to cover.

The Nove Mesto was established around three market squares: Wenceslas Square, Charles Square and Senovazne Square. Sadly, much of this district was demolished in the late 1800s and rebuilt. Timing with the turn of the century, the rebuild gave birth to a wave of Art Nouveau buildings which still stand today. If you’re a fan of this period, you’ll be in seventh heaven in the Nove Mesto.

We start where we left off yesterday, seeing the gold capped National Theatre, viewed best from yet another tiny island on the Vltava. Incredibly, after being built in 1881, it burnt down days before its schedule opening. It was rebuilt with private donations and opened two years later.

There’s also the Dancing House, also known as “Fred and Ginger” for its likeness to the dancing duo.

We attempt following a recommend walk highlighting key sights, but try as we might, despite being armed with a guide book, the tourist information map and Google, our navigation isn’t the best today. On more than one occasion, we become lost or stray into Stare Mesto. It’s the cause of some frustration.

We have more successful around Wenceslas Square (pictured above) where we also stop for lunch. Himself orders a spit roast,

I have an Iberian pork burger.

White cabbage with liberal application of fresh horseradish is a good accompaniment to both.

Wenceslas Square is named for the patron saint of Bohemia, a statue of his likeness looks down the boulevard.

The National Museum, built in 1890 is the Square’s crowning glory. Its elegant marbled interiors are equally stunning. 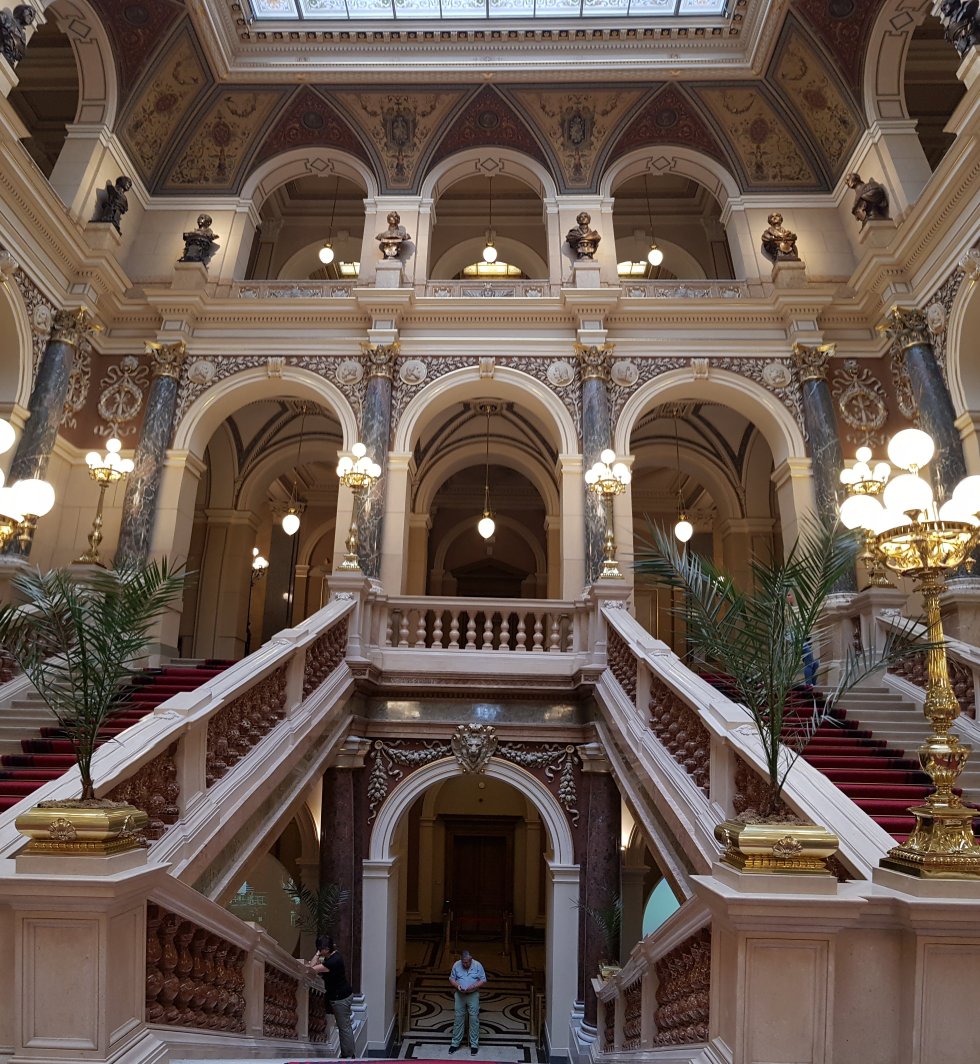 I had hoped to have a drink at the Hotel Europa, which is meant to have divine Art Nouveau interiors, but sadly it’s closed for renovation,

as is, we find out later, the State Opera.

Post lunch, we ditch all navigational aides and just wander where the eye takes us. This proves much more successful in seeing lovely things (including all the Art Nouveau buildings above), despite the fact that we can’t identify many of them. Can’t have it all, I guess.

We do find the Lady of the Snows Church, an incomplete build from the 14th century and its pretty Franciscan garden. The Franciscans restored what was built of the church in the 17th century. Only the presbytery was completed of the original design.

We eventually end up back in in the Stare Mesto (all roads seem to lead us back) for refreshing late afternoon drinks and a cheeky cannoli. The Italian restaurants really are very good here.

It’s our last day in Prague. It’s with some melancholy we farewell the swans on the Vltava and take the ferry crossing for the last time.

I’ve probably pushed Himself far too hard, and yet I’ve seen barely a fraction of what I’d hoped. Even with three days to explore.

I was right in my conclusion yesterday: the only way to truly do Prague justice is a street by street walk, revelling in the beauty that surrounds you. Farewell Prague. You were magnificent.