We may have just jagged the perfect location to explore Prague, on a tiny island betwixt the Stare & Nove Mesto (Old & New Towns) and Hradcany & Mala Strana. Serviced on both sides by an equally tiny ferry, and trams, it’s put us in easy reach of, well, everything!

Our first stop is the Charles Bridge, built and named for Charles IV in 1357, it took until the 15th century to complete.

Built from sandstone, it replaced two earlier wooden bridges, both of which were lost to floods. There’s little risk of that with this version – the bridge features 21 arches running for just over 500 metres, 10 metres wide, with fine gothic towers at both the Stare Mesto

and a series of 30 statues added in the 18th and 19th centuries.

The 1629 crucifixion statue (below) was the original and only statue for 200 years. Written in Hebrew are the words “Holy, Holy, Holy Lord” paid for by a Jewish person as (then) punishment for blasphemy.

Up unitl 1741, the Charles bridge was the only crossing on the Vltava River. Judging by the crowds, it might as well still be. The 21st century addition is tourists, thousands of them, swarming one of the city’s best known attractions.

Having come this far and crossing the bridge, we decide to stay and explore Prague’s original settlement from the 9th century, built around its castle.

It’s a fair hike up hill, but along the way we see Mala Strana (the Little Quarter) on the lower slopes

and the settlement of Hradcany, built in the 14th century around the castle’s outer walls. It seems to be a very popular area for embassies currently.

The architecture is stunning, largely unchanged from the 1700s, gorgeously intricate and ornate. It takes some significant effort to not turn an ankle on cobblestones, given its impossible to look down, away from the gorgeous buildings that surround us.

Having made it to the top of the hill, our first stop has to be St Vitus’s Cathedral. Standing centre of the castle complex, it’s Prague’s most distinctive landmark.

Work began on the Cathedral in 1344, taking another 600 years to complete. It’s fair to say, it’s a Gothic masterpiece. 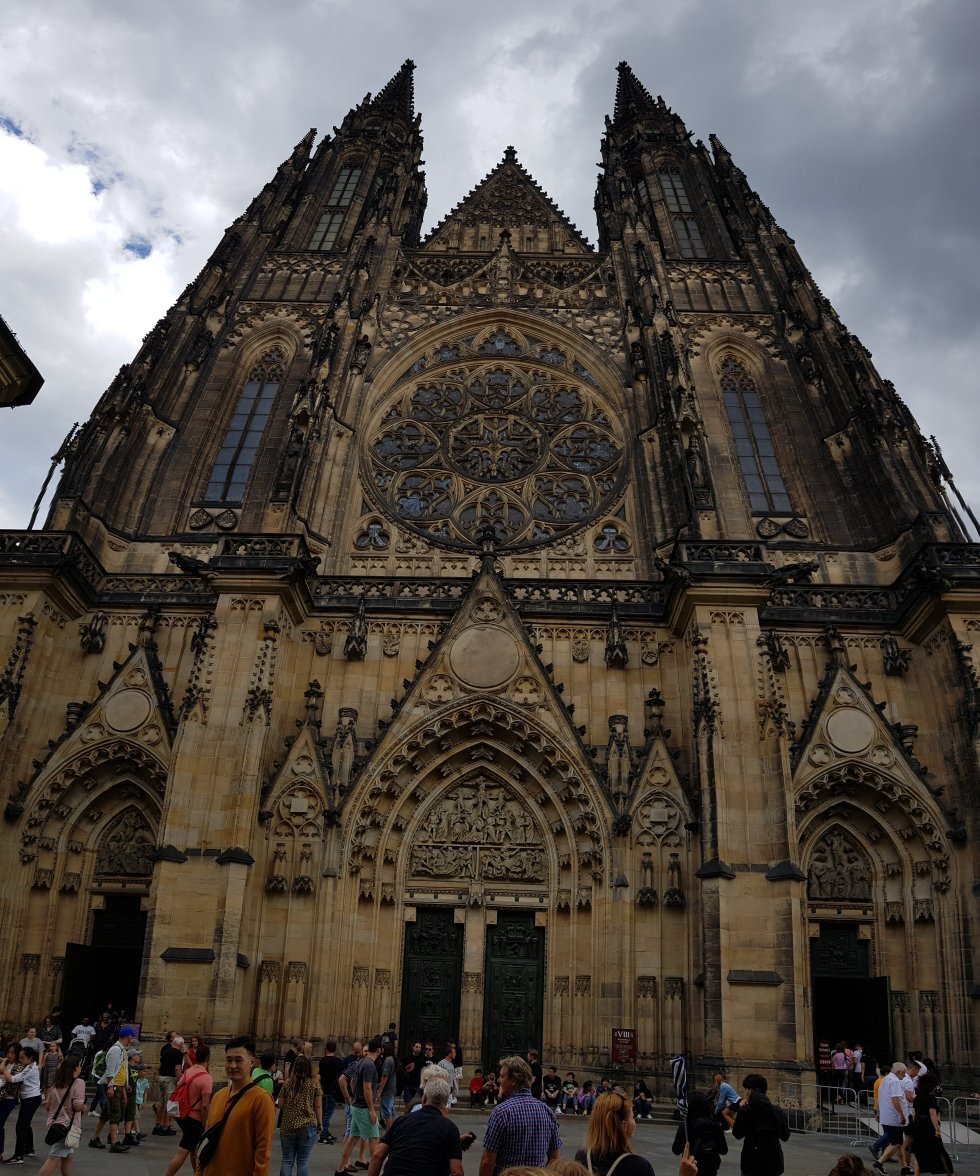 Particularly impressive is the Chapel of St Wenceslas.

We also tour the Palace, its churches, chapels and halls – it’s retained history from each century of its development.

The views from the castle walls are rather rewarding:

We also see the Golden Lane, a quirky lane of doll sized houses, home to goldsmiths who lived here in the 17th century.

They must have been tiny – the rooms are extraordinarily small. Most houses consistent of two rooms, barely large enough to turn in, once furnished.

Castle toured, we pop into the Church of St Nicholas, built over 60 years, the work of a father and son architectural team. It’s considered a High Baroque masterpiece, although sadly neither of them lived to see it completed. It’s fabulous, gloriously decorated by leading Baroque artists of the day.

At some point, lunch beckons, Italian for a change. Calamari for me

and pizza for Himself – it was excellent too, I only just caught a photo of it!

After lunch we pick up tickets to an evening concert and continue exploring the lower slopes of Mala Strana. By day’s end, it’s a bit overwhelming – there’s so much to see. 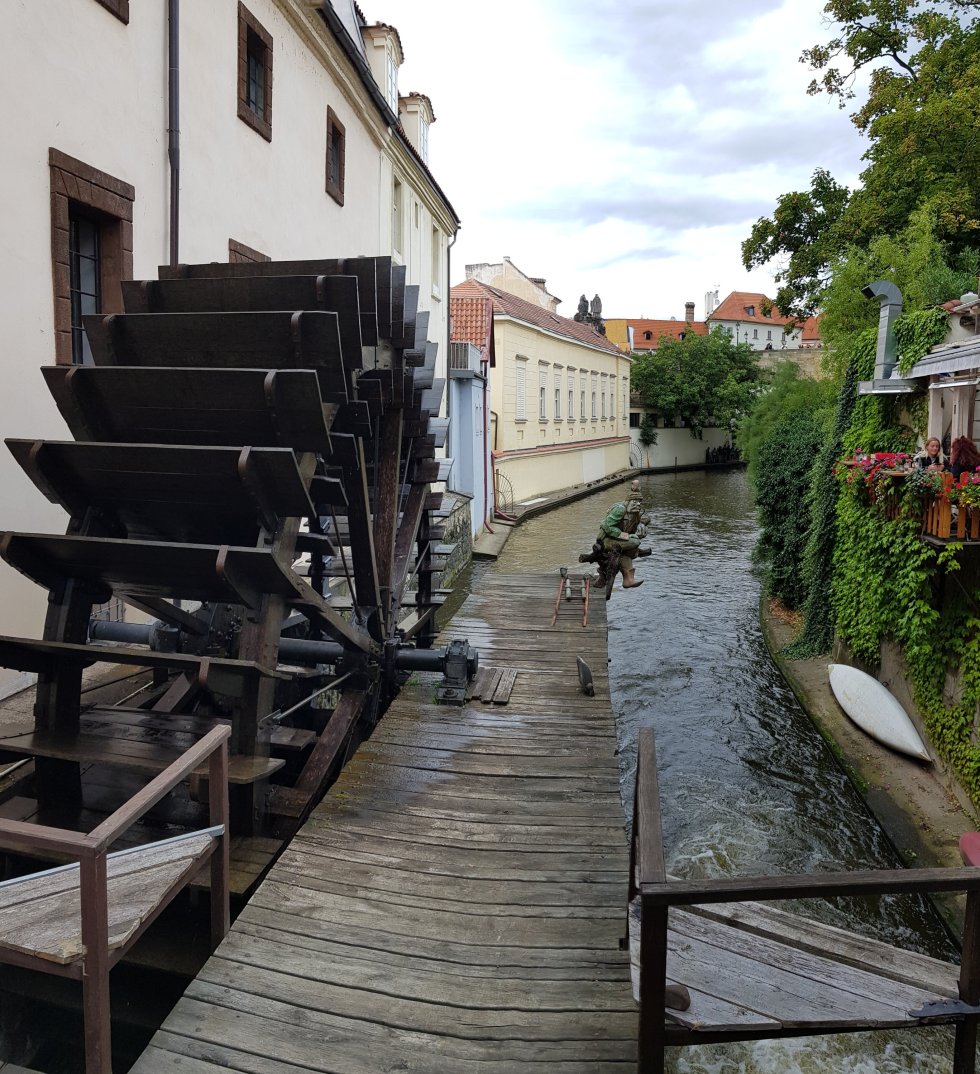 We eventually tire out and settle for drinks before the concert – very well deserved drinks, we’ve been walking for hours.

We’re seeing a string quintet, a chamber music ensemble featuring musicians from the Czech Philharmony and the Prague Symphony Orchestra, performing in the Lichtenstein Palace.

Their performance is flawless, truly a joyous experience, covering classic pieces from Vivaldi, Ravel, Strauss, Bach, Tchaikovsky and Mozart, amongst others. We’re both delighted we had the opportunity to hear them play.

The only thing left to do is sample a Prague “chimney cake”, mine filled with strawberries and chocolate, topped with icecream, and head on home on a high note. What a magical day.

Everyone who’s been to Prague said it was one of the most beautiful places they’ve seen. You know what? Just between you and me, they were absolutely right.