We’ve both become quite bewitched by the sheer loveliness of Alscace, barely moving these past few days. And what’s not to love? Picturesque villages full of mediaeval half timbered cottages, prettily flowered window boxes, endless restaurants, delightful wine. Not to mention an excellent run of good weather. Any plans we have for heading south have slowed a tad.

Today runs true to form, we move only a short way down the wine route, to Kaysersberg. If you ever wanted an example of how integrated Germanic and French cultures once were here, the name of this town is a good indicator.

Set in a valley with the river La Weiss running through it, Kaysersberg is just as pretty as Hunawihr, but quite a bit larger.

Its ancient heart remains intact with endless examples of perfectly preserved buildings ranging from the 1200s (ruins of the old castle above it) through to the 1600s.

Deemed an imperial town by King Adolphe of Nassau in 1293, Kaysersberg not only held a strategic defence position, but also commanded a trade route linking Alscace to the Lorraine region. The town prospered until the Thirty Year War (1618 – 1648) which effectively stopped its economic growth, regaining strength only following the French revolution. Battle scars from 1944 can still be seen on some buildings – significant damage was incurred in the battle for liberation. 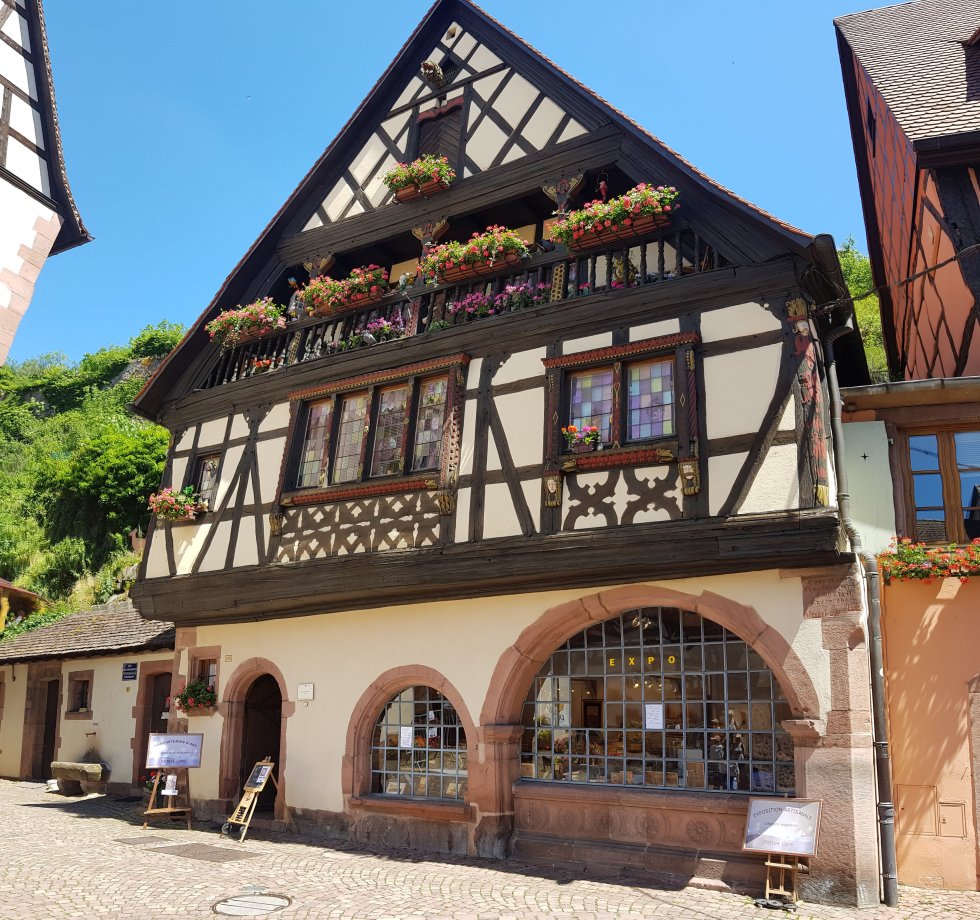 Today’s industry, typical for the region, focuses on two things: wine and tourism, doing a brisk trade in both. For once we’re not out for lunch, but instead take the recommended walking path through the town and its surrounding areas. It’s another stunning day, bordering on hot even, making photography a dream.

One of the original watch towers boasts tenants – a nest of four young storks, no doubt the descendants of graduates of Hunawihr’s wonderful breeding centre.

I can see the town is kind to its birds – many houses have installed pre-built swifts’ nests in their eaves – although a few birds have persisted with old school methods!

Himself wants to keep up wine supplies (we might run out.. quelle horreur!) and so steers me towards another wine degustation.

Not that I’m complaining mind, I quite enjoy the family run vineyards. I learn something new today – this region also produces a sparkling wine known as Cremant d’Alsace. It’s produced in a manner identical to champagne, but designed for drinking within 5 years, unsuited for long term cellaring. Long term cellaring – there’s an oxymoron if ever I heard one. 😉😂

Eventually the heat of the afternoon wears us out down, settling in the square for a drink. I try the cremant with an added twist of peach liqueur – very refreshing in the heat.

It’s a quiet night in, on a thankfully much cooler evening.