Very excited to be arriving in Split today. It’s only a short drive up from Omis, we could have arrived earlier, but we wanted to be sure of good weather. Split itself has very limited parking and no motorhome options, so we stay a short bus ride away in the seaside Stobrec. And what a fabulous spot it ends up being: our site is right on right water, literally on the beach. Perfect!

What sets Split apart, other than its spectacular location, is that its monuments and historic buildings are not sequestered as musuems: they’re still very much in use.

It was built as a retirement home for the Roman Emperor Diocletian, who holds the distinction of being the first Roman Emperor who lived to retire. All the others were either killed in battle or were murdered on the job.

Our guide book shows how the Palace would have originally appeared. Key buildings are still here, and I’ll admit to driving myself a little nuts looking for other aspects of it, until I spot the word “depiction” near the drawing. 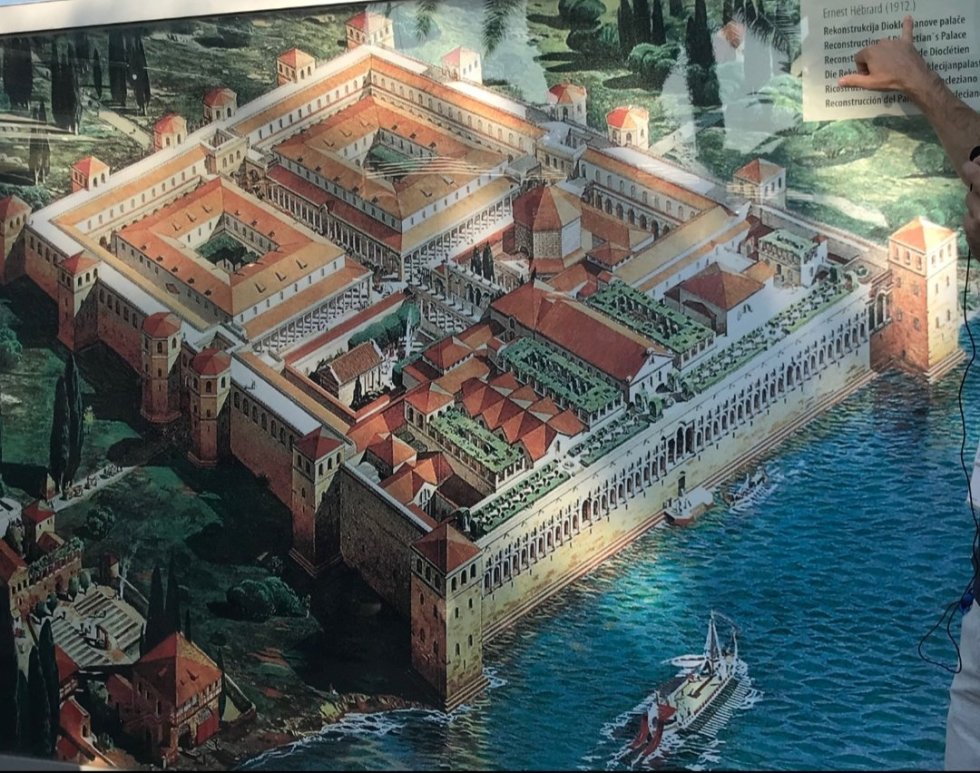 Not to worry, there’s an endless amount to still see. There’s the stunning colonnaded Peristyle, the heart of the Palace, now a busy square.

Inside are intricate carvings, perfectly intact, despite being set upon by thousands of tourists daily. Ironic that the Cathedral sits over the Emperor’s resting place, given that he went down in history as an avid persecutor of Christians, sentencing many to death.

Set alongside the Cathedral is the beautiful Bell Tower,

I was tempted to climb the Tower until I learnt there’s a section of opem spiralling metal steps. I’ll settle for photographing it from here, then. At a better height, below ground, is the crypt with the original Tower bells.

We see the subterranean chambers now home to stalls selling trinkets and souvenirs, the scent of locally grown lavender permeating the air.

From its beginnings as the Emperor’s Palace, Split grew and expanded from century to century. It features buildings from each of the periods, now homes, shops, restaurants, helpfully detailed with informative plaques about their origin. With 3,000 residents in the centre, it’s truly a living musuem. 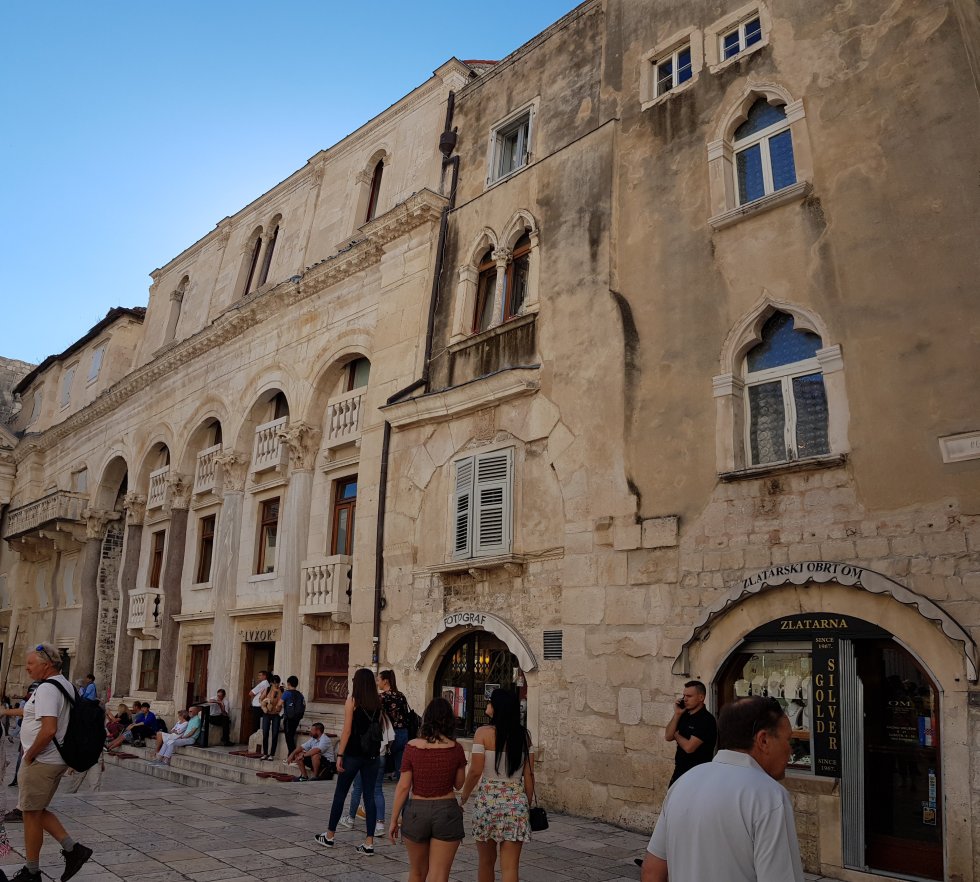 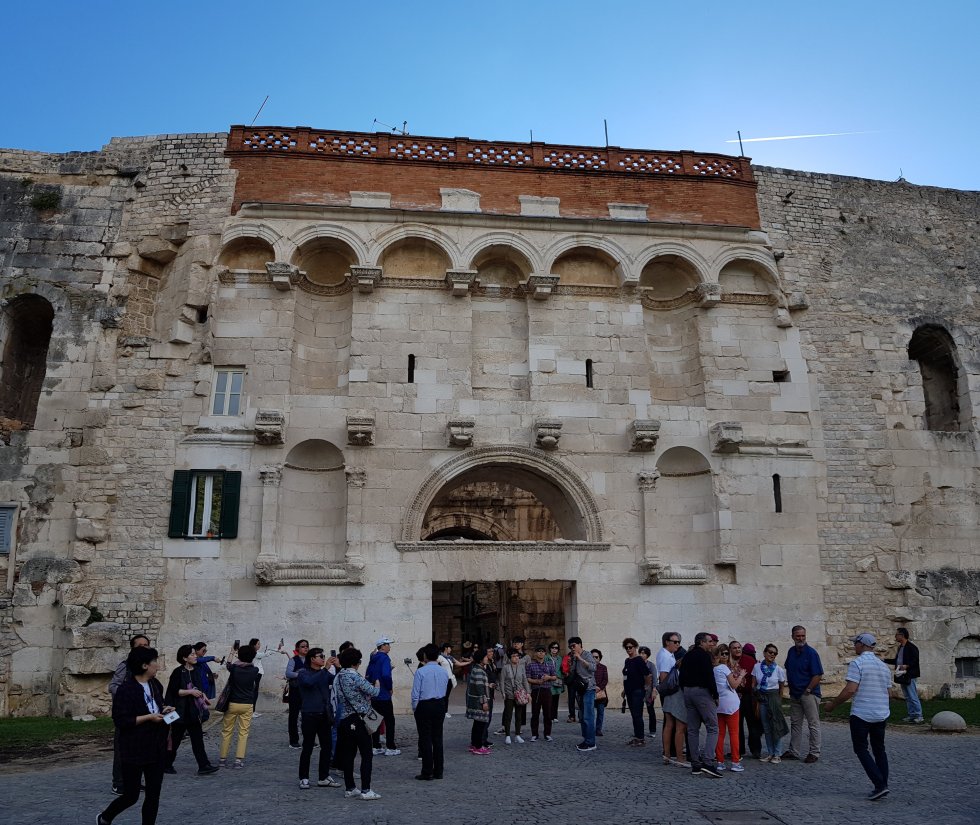 Each of these served a specific entry points depending on your ranking in society. The Iron Gate is particularly beautiful, with its belfry clock, thought to be the oldest surviving version on the Adriatic Coast.

We both have fallen for Split’s charm. Sitting outside in one of its many squares sipping a cocktail in the late afternoon sun, watching the world go by, walking through history, meandering the harbour: it’s all beyond delightful.

It’s another spot that’s immediately made my favourite places list. Another I’d happily move to, tomorrow.

Chris drags me home eventually. Only because I foolishly took chicken out of of the freezer before we left. Guilty about all the eating out! It ends up a delicious meal though, crisped in the BBQ over a bed of potatoes, tri coloured capsicum, onion, garlic and rosemary. Himself declares it a hit.

By our side, Stobrec’s evening lights sparkle over an inky sea. I LOVE IT HERE.