In between yesterday afternoon’s coffee hit and the anticipation of squirrelly adventures this morning, there wasn’t much sleep last night. But the lure of squirrel is a powerful one – it’ll take more than lack of sleep to stop me achieving the required early start. And there’s always morning coffee. Yes, there’s no need to point it out, I see the pattern there…

Tivoli Park sits to Ljubljana’s west. It’s named for the Jardins de Tivoli in Paris and was laid out under Napoleonic rule. With an appealing blend of wilderness and formal areas it’s also home to a sporting stadium, tennis courts, an indoor pool and the Tivoli Mansion, once the summer residence of Ljubljana’s Archbishops, now a graphic arts centre.

Wilderness, we deduce, is the place to look. Nuts in hand, off we set. The park is very popular with joggers, hikers and dog walkers, but at this early hour we have it relatively to ourselves.

A long walk through the main wild thoroughfare, though peaceful and lovely, offers no squirrel joy, so we attempt a smaller track.

Nope, no luck there either. Chris starts to make noises about needing to get going. Hmmmm.

Somewhat disheartened, I bargain for time. “I’d like to see the formal gardens” I say. Along the way, there’s a clue that we’re on the right track…oh!

We never quite make it to the formal gardens. Just near the Tivoli Mansion, is a wild bird sanctuary, so named as the wild birds have become so tame that’ll they’ll eat from people’s hands. And…there’s a picture of a squirrel: “also home to squirrels”, the sign says!

No sooner than I read this I spot movement out of the corner of my eye. It’s squirrel, much tinier than any we’ve seen before. But wait, there’s movement right next to us – the most gorgeous chocolate brown squirrel with a creamy white bib, right in front of us, tentatively inquiring, do we have any treats?

Peanuts come out, but oh no, disaster! He doesn’t like them. I don’t think he knows what they are. Clearly, we have bought the wrong nuts.

Mere metres away, our next squirrel is a deep, gorgeous, russety red.

She doesn’t like the peanuts either. All of a sudden there are squirrels everywhere, many shades of red, and high up in the tree canopy, two of the tiniest little red babies frisk about.

It’s official I’m in squirrel heaven. Albeit dying of frustration, not having nuts they like. I’m torn between seeing as much as I can and trying to take photos.

There’s only one thing for the nut situation…off to the supermarket to buy walnuts. We trek into town and back. Walnuts prove much more popular, going a long way to redeeming our reputation. 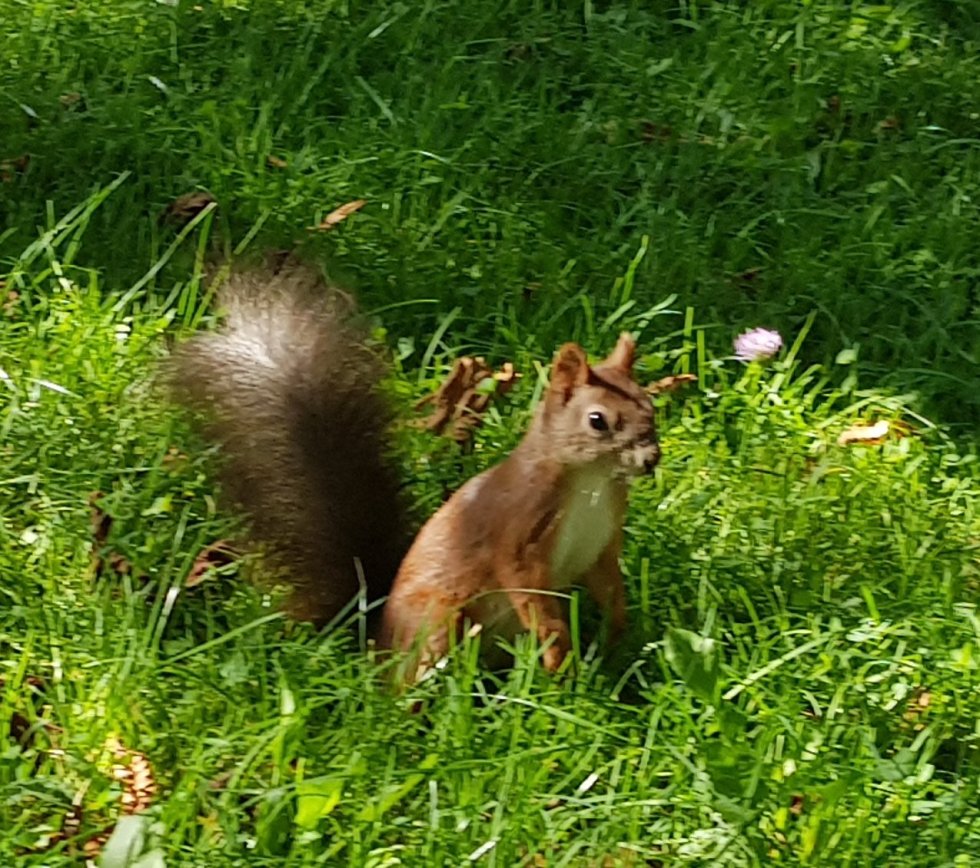 Much happiness coaxing many gorgeous, tufted squirrels to accept treats out of our hands. Slovenian squirrels are quite different to others we’ve seen – smaller, more finely boned with slim bodies. Our chocolate friend was a wee bit bigger than his russet buddies. I’m deeply in love.

I’m sure I don’t have to explain that I needed to be dragged away. By that stage though, it’s later in the morning, people are now out in force and the squirrels are settling in for their mid day naps. I reluctantly allow myself to be led away. I can’t resist leaving walnuts in strategic spots. I need to be fully forgiven for those unacceptable peanuts.

The rest of the day passes in a bit of a blur. We drive towards Croatia, ostensibly to cross its centre to reach Bosnia. The stunning Croatian coast will need to wait for the return part of our journey.

We end the day in Zuzemberk, still in Slovenia, in the Krka river valley. It’s another picturesque village, overlooked by the 16th century Zuzemberk Castle.

The village is tiny but there’s a bar right on the river bank which makes a great setting for an afternoon drink. We share the venue with the extended family of a couple renewing their wedding vows. You have to love the offbeat spots: the bill for a massive beer and 3 glasses of good local red? – €5.80. Really.

I come down from my squirrel high by trying to capture the perfect reflective shot of the castle. I’ve had the most wonderful day amongst new furry friends. Don’t tell Squiz. I think he’d be jealous.