We spend today winding through the glorious mountains of the Picos de Europa and the Pyrenees, soaring heights on all sides.  Luckily the road is often set in the valleys, bringing with it scents of wild fennel, mint and blackberrys, depending on who or what last trundled through. 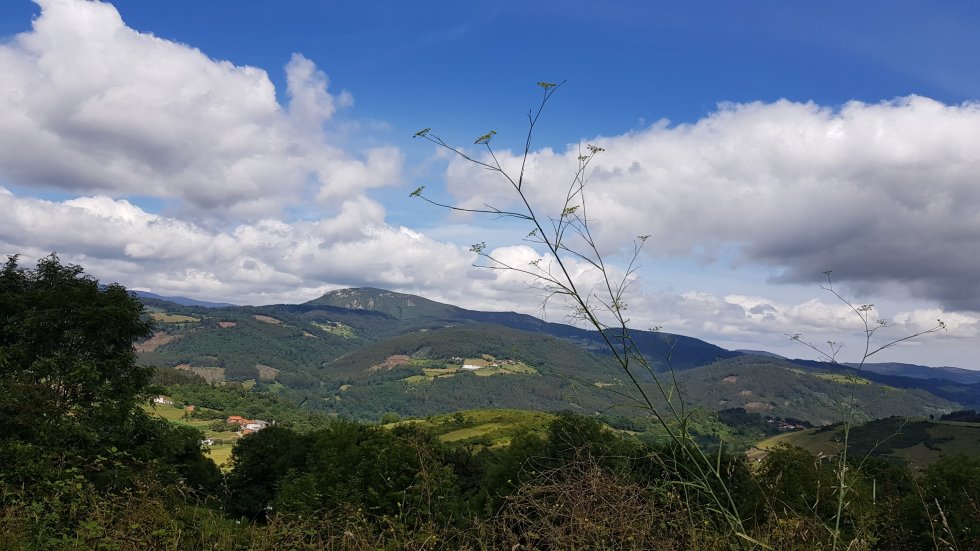 Horses make regular appearances, as do brown and grey donkeys. Most farms have at least a few horses, often with a foal frisking around. 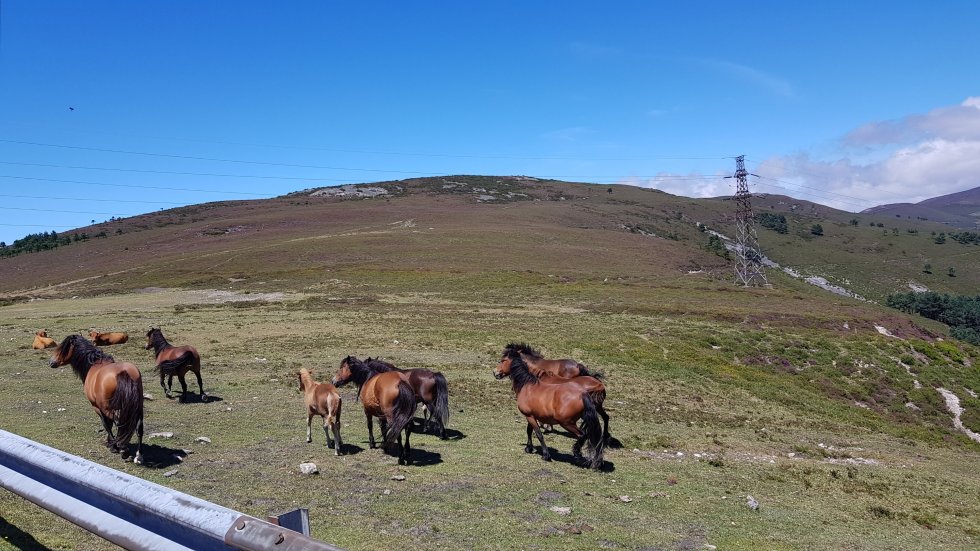 We’ll attempt distance again today.  A fortnight marks our midway point, by which we should have made the turn homeward and we’ve not yet reached the Galicia region of Spain’s far west.

The mountain scenery is truly spectacular. Separating northern Spain from the rest of the country, this mountain range is also a key part of the climate of the northern regions, giving them their distinctive, different climactic feel.  Soaring to above 2,000 metres, flora and fauna is different here too, with alpine flowers and creatures including a chamois, pine and beech martens, weasels, eagles, wolves and yesterday’s brown bears to name a few.

At one point we pass a reservoir, dammed on one side, deep green waters the other.  It’s extensive, winding through several valleys.

The mountains here are interesting from a geological view.  I  watched a program last year that commented that all mountains are a result of movement – land crashing into land, forcing rock upwards into peaks and gorges.  You can often see the striations in rock faces, marking movements millenia old.  Here, there’s a twist – not only upwards, but also a sideways movement, splitting some mountains into thick layers.  Like slate, but each layer thick rock.
We pass from the Austurias region into Galicia.  It’s here we see a the first of the horreos, granaries, built on stone pillars so as to keep rodent from eating the grain. Every farm has them, most still in their intended use, but we see a few that have been converted to little apartments – a granny flat on stilts.

On high, the mountains are covered in blankets of bright pink heather indispersed with a tiny yellow flowers.  On the lower slopes we see bee hives, no doubt taking advantage of the profusion of flowers. 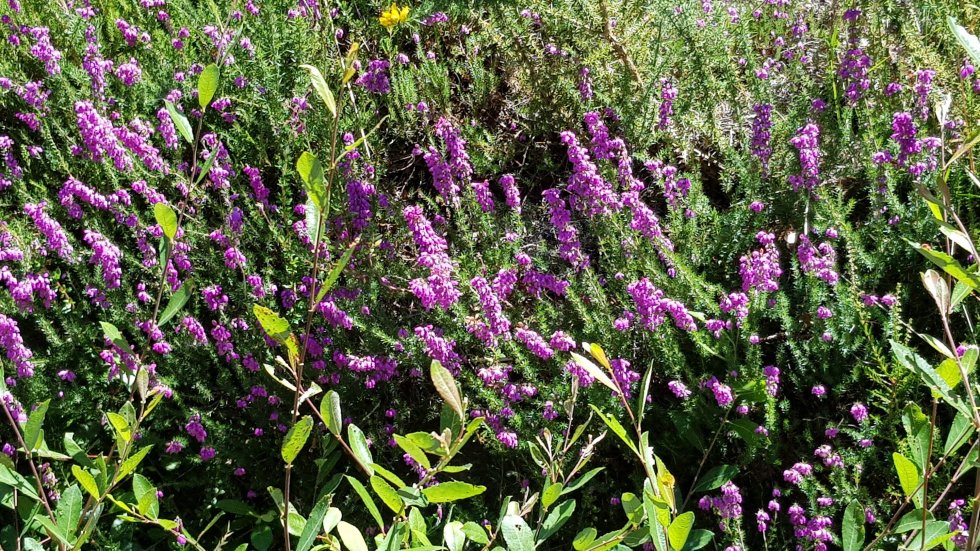 Mid afternoon sees us start a steep ascent, culminating in a peak that sees us, literally on top of the world, endless mountains on all sides, truly jaw dropping views. 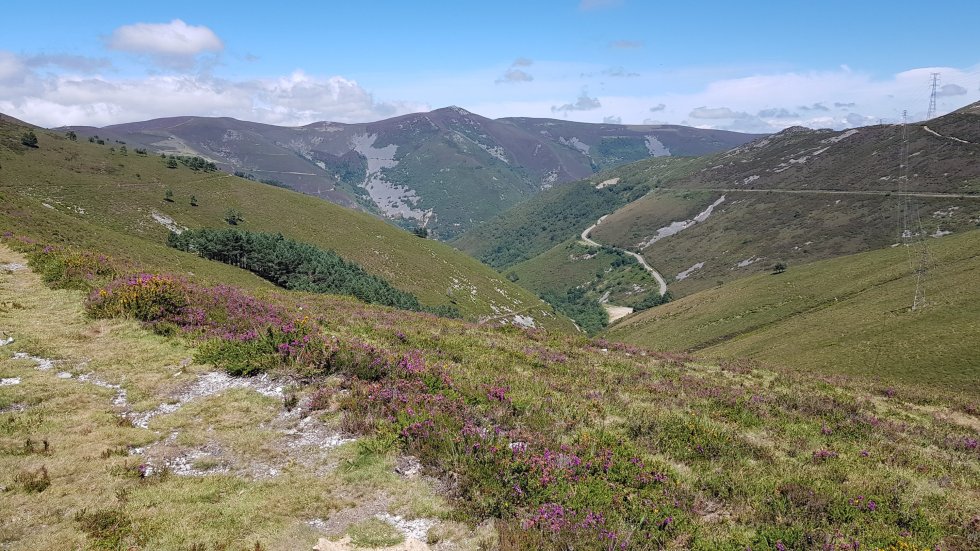 It’s here we settle for the night with grazing cows and horses for company.  There’s a watering hole nearby which they make their way to in an afternoon ritual that appears very organised.

Lots of foals and calves following their mothers intently. A group of three eagles glide on the air currents above.  The binoculars come in very handy for spying on everyone.

Unbeknownst to us, we’re also at the peak and joining of two pilgrimage paths into Santiago de Compostela.  Pilgrims have walked these mountains for over 1,000 years. 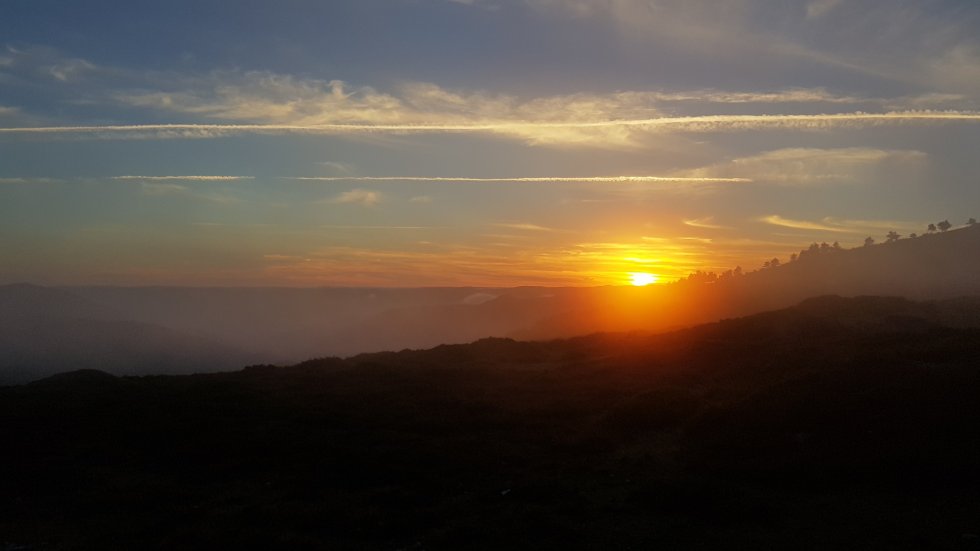 The sunset is spectacular, accompanyied by a fast moving mist, rising over the mountain, engulfing us in minutes.  Quite incredible how quickly the conditions change from glorious day to seriously cold.  Another starry night sky too.  It’s bliss in the mountains. 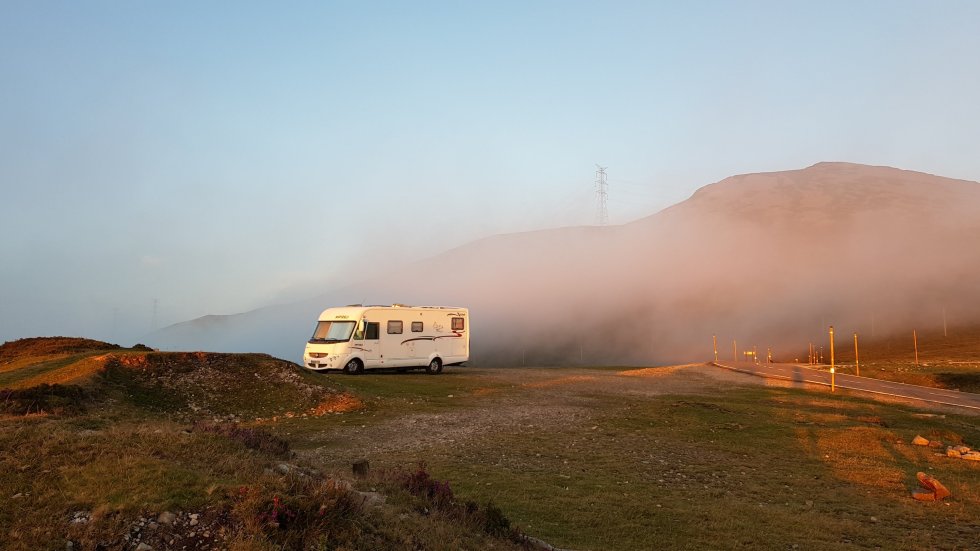 The highlight of the day has to a tie between the 360 degree spectacular views from the top and the speedy chocolate weasel who bounced across the road just before the peak.  For vicious little beasties, they sure are cute. 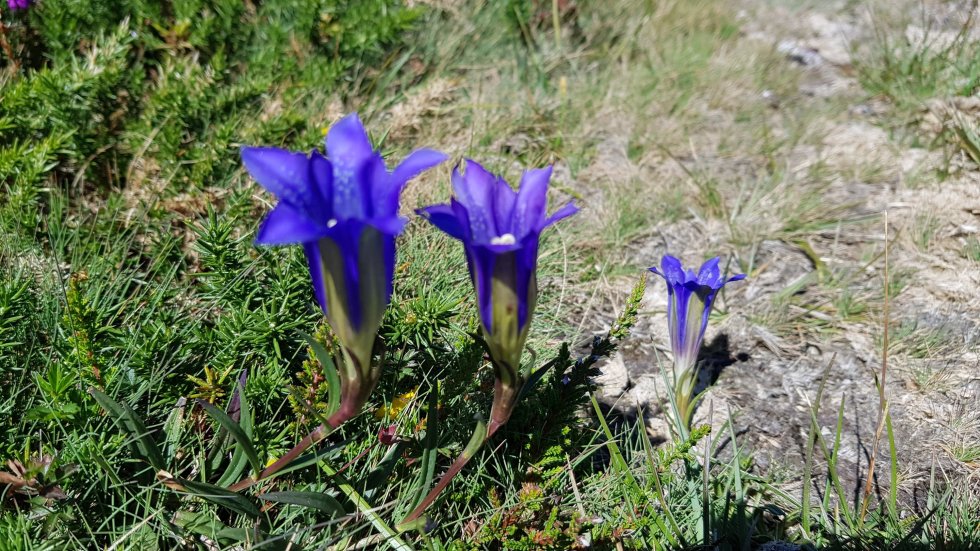