It’s this portion of our travels where I wish for a magic wand.  One that I could swish and flick, not to levitate a feather, but to pack up and clean in one swift decisive motion. I have one actually, at home: Hermione’s, but sadly not the magic to accompany it.  Back to being a house elf it is. *Sigh*

There’s respite though, in the afternoon. We drive into Truro to run a few errands (aka…scope my favourite shops).  I have a very important task to fulfill: picking up my and Justine’s copies of the Harry Potter and The Cursed Child script that I placed on order at the start of our journey.  We’re both Potterheads and I can’t wait to give her this new treat to devour.  I’m sitting on my copy until I get on the plane.  It’ll take some discipline, but also some of the sting out of the long flight home.

Truro is a great spot: the skyline is dominated by a huge cathedral and it’s set on a tidal river. You never know if you’re going to be greeted by exposed mud flats or the river in full flow.   It’s is large enough to offer a variety of shops and restaurants, small enough to still feel that you’re in the country.  Crimped Cornish pasties are on offer on every corner.  Four years in using it as our base, it’s starting to feel like a second home.

Post shopping, we set off to see the East Pool Mine, a tin and copper mine since the early 18th century until 1945, now a National Trust historic site.  TomTom takes us along an incredibly convoluted path down tiny streets and up even tinier country lanes. Unrestrained by size with the car in tow, we’re getting a whole new view of Cornwall.

Eventually we arrive.  One small glitch…the mine is shut on Sundays. Eagles eyes over there failed to spot that. Next time perhaps.  In the meantime, it’s back to car, to Trerice, an Elizabethan manor house.  It’s another National Trust property, nearby.

On our way, we come across the most wonderful vintage vehicle: a Stanley convertible, a steam engine car.  I don’t know how, but it runs on steam, billowing out behind it in great plumes.  Fabulous!  The couples in it, and even the dog, are having the time of their lives, giggling their heads off.

We’ve been to Trerice before, but it’s well worth another visit.  It’s looking particularly resplendent with its Dutch gables in the late afternoon light.  The restoration works that were underway when we were last here have now been completed leaving the house unencumbered by scaffold.  We tour the house, picking up tidbits of its history from the very knowledgeable Trust guides.  The house is largely unchanged from its original design, in the main due to long periods of ownership by absentee owners. 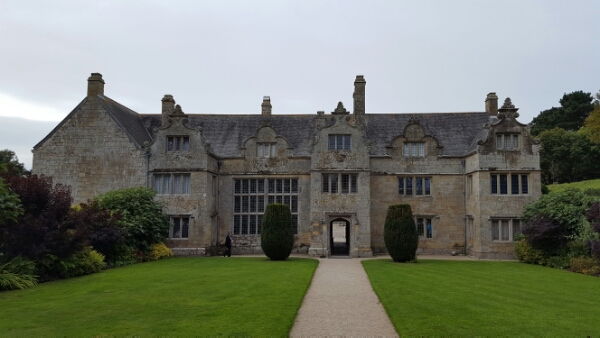 Just as well too: it’s an absolute gem and features beautiful patterned ceilings, grand fireplaces large enough to stand in and old world pursuits such as a kayling green and games of slapcock.  Yes, really. I’m guessing that’s a bit more sedate in practice than it sounds in name. 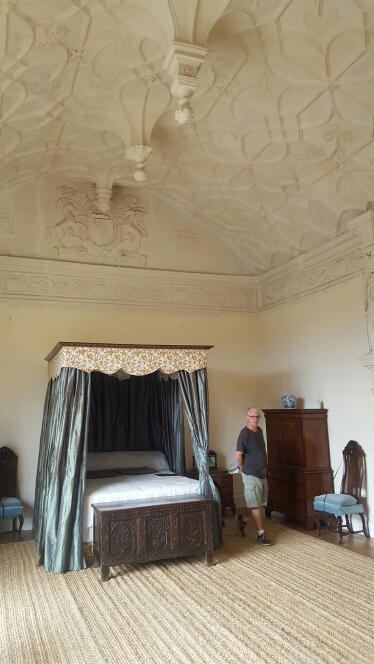 Also new this visit, are the masses of cyclamen that have sprung up under the trees – so pretty.  I might try to copy the effect under our Hawthorn at home.

The gardens are looking lovely, simply planted in white and purple, a pretty contrast to the greenery that frames them.

The bumbles are out too, particularly amongst the purple flowers. Making the most of the mild autumn weather I’m guessing. I miss the bumbles when home.  I wish we had them.  Love their fuzzy butts and the way they tolerate a pat and buzz patiently against your hand.

On the way out, I can only look longingly at the garden sculptures on sale in the gift shop.  Two in particular catch my eye, a tall bunny with a very cheeky face, and a family of ducks.  The logistics of getting anything of their size home are impossible.  Not to mention the possibility of breakage. Might need to enquire about international postage options as a future possibility.

My disappointment is dissipated on the way back to the carpark: another busy autumn squirrel about his squirrelly business.  This one obligingly stops for a photo.  Little pet.  I want him too.  I think perhaps I was meant to live Snow White’s life, in the forest, with the forest creatures my friends.