Everyone knows I’m not a fan of mornings, right?  Give me the inky night any day.  Perpetual twilight would be pretty awesome too, indispersed with just the occasional perfect blue sky day. Personal preferences aside, it’s up at the crack of dawn to see the service boys in the hope of solving our starting problem.

Kindly, they lend us a zippy little car so that we can continue to explore Gotland. People can be quite lovely, can’t they?  Often perfect strangers too, which goes a long  way to restore my sometimes shaken faith in human nature.

Zippy car in hand, it’s off to explore my village namesake, Sanda.  It’s not very far, some 30 km south of Visby.  The village is tiny and pretty, farmland in the main, cute cottages and a primary school. Horses and black sheep abound – only the odd white one.  Chris spots a pheasant treading warily through a meadow. 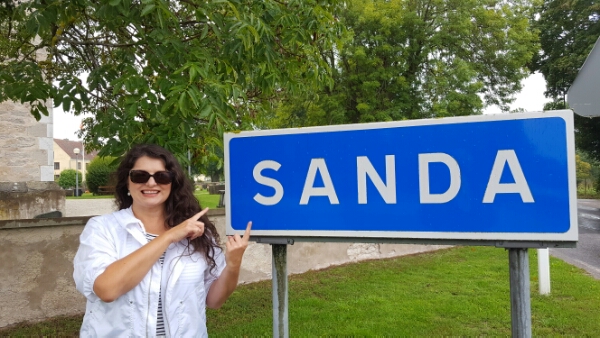 There’s also a Sanda Kyrka  (church), 13th century Lutheran, with medieval frescos. Much fun had posing with the town sign out front.  When you have an unusual name, it’s rare you come across it anywhere, so this is a utter, if silly, treat.

There’s a pretty interesting coincidence at play here.  A famous Viking rune was unearthed in the Sanda churchyard in 1863, depicting the Norse pagan gods, Odin, Thor and Freyr (aka Oden, Tor, Frej).   We were in Stockholm’s Historiska Museet the other day, and of all the runes on display, it’s one of the few I photographed, along with its description plate.  I hadn’t read it at the time, but checking my photos reveals the rune’s origin.  What are the odds there?  Us being in both places, of all the places in our travels, and that being the rune that drew my eye.  Off the charts, I’d imagine. 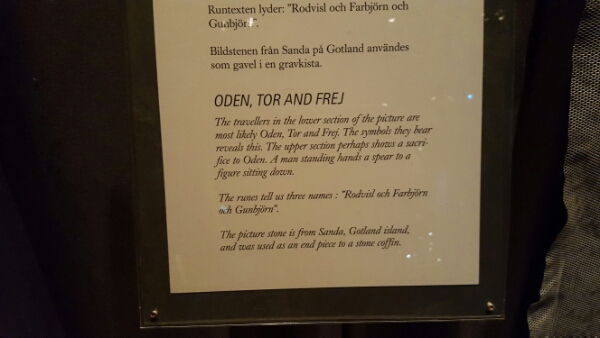 Sanda explored, it’s back to Visby.  We’re in search of the gardens, Botansika Tradgard, and along the way spend a pleasant couple of hours meandering the streets, soaking in the town’s history and that of Visby’s many church ruins.  Visby slowly abandoned Norse paganism, converting to Christianity in the 11th century.

They were a religious bunch – in between the 12th and 15th centuries, in a relatively small town, there were 17 churches (94 on the island of Gotland) here in the Middle Ages, each with their own unique design at their point in time. Their own Saint too, most of whom came to gruesome, martyred ends.  Old school Christianity was a tough gig.  Thirteen church ruins are still here within the city walls, well protected under UNESCO.  It’s a walk, history lesson and an archeological tour, in one. 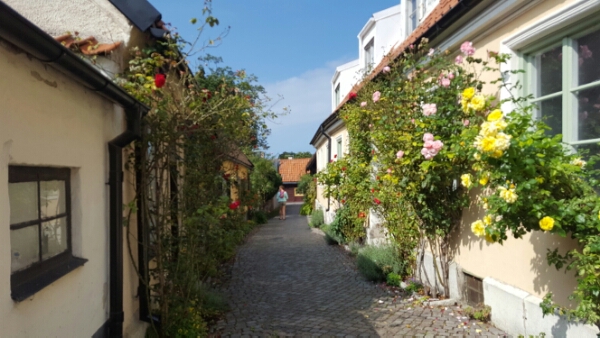 Visby was a key Hanseatic trading port in the Middle Ages, along with Bergen and Lübeck.  Its wealth and long term viability stemmed from these origins. In that time, the defensive walls were at sea level – boats sailed in  right up the wall, loaded or unloaded and went on their way. The city walls are now well back from the sea, with enough room for carparks, grassed areas and both walking and bike paths.  That’s a lot of movement in 500 – 600 years  Visby was also key in negotiations for peace in the 1500s war with Denmark and Lübeck.  Business continuity and prosperity is a powerful motivator.  Most of the churches were left in ruins during this time, with only the Domkyrka remaining intact today. 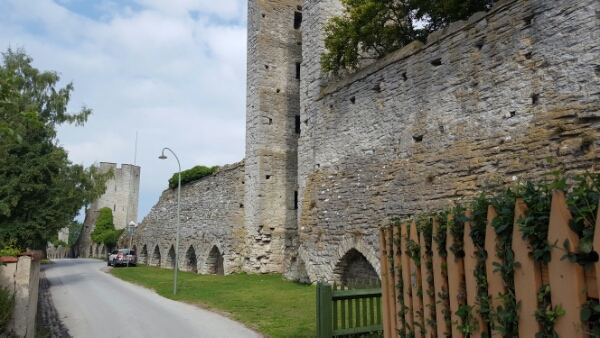 We eventually find our way to the wall and walk its path, past the East and North entrances, past the many guard towers and the guards’ walk. Despite being built in 1288, most of the wall is intact and in excellent condition. The wall was not only a defensive measure, it also served as a trade barrier, a point at which levies and taxes could be charged.  It’s a very peaceful walk, ending in the lush greenery of the botanical gardens.

In full bloom, the gardens are a welcome oasis.  Roses scent the air and there’s even a wildflower meadow, complete with bee hives at one end.  Bee bliss, I’d imagine.  I can just interpret that bee dance: Scout bee: Flowers! All sorts! Thousands of them!  Right outside the hive!  Worker bee: Dude, you’re high on honey.  Go look again.

We stroll through the gardens stopping to sniff the flowers and and admire the old trees – there’s quite a variety.  Again, so much foresight in planning, paying off centuries later.

Tummies rumbling, we stop for lunch in the main square, another delicious meal. Have loved the seafood in Sweden, pasta this time with scampi, crayfish tails and mussels.   Definitely will need to invest in a hamster wheel on our return.  We watched a Tom Cruise movie the other night, set in a dystopian, alien future.  What’s that he’s exercising on?  A futuristic hamster wheel.  Decades ahead of my time… 😉

The service boys call.  It’s not good news. They think it’s something called a flywheel, not the starter.  Might take weeks to get the parts and repair.  Might not be that too.  Much stress from Chris and reworking of what our final journey might look like.  Where do we do the repair – souhern Sweden, Denmark, Germany, France?  All of which are on our plans for the way home.  Wait until England?  Each option has its issues and we’re not even sure of the problem.

We finish lunch then head back for the motorhome, stopping along the way to see the Hogklint nature reserve, set on a forested headland.  It offers stunning views up and down the coast, showcasing the pretty white pebbled beaches. Hogklint is a haven for birds; they twitter about happily in the sun.

Gotland is truly lovely; we’ve only scratched the surface of what it has to offer.  We could easily spend weeks exploring.  Yes, please.

Meanwhile, back with the service boys, the motorhome goes through its painful start.  Listening to it, they reconsider, hook it back up to the computer and decide, no, not the flywheel.  Maybe the ignition.  Hmmm. It’s deemed unlikely that it will break down and we go on our not quite merry way, a little unsure of what the future will bring.

The immediate future is easy though: a walk along the beach, a lazy late afternoon read, and watching the most glorious sunset render the sky all shades of blue,pink and gold.

I utterly love it here.