Today will be our last day in Finland.  We have to cut our time short as it’s just not set up for motorhomes.  It’s a shame as the countryside is very beautiful and the wilderness lends itself to this type of travel.  The biggest problem is that there is no supply of LPG and running out would mean an end to hot water, refrigeration, cooking and heating.  Services are an issue too – unlike other countries, there are no service points making basic needs such as water supply a problem.

I would have liked to explore the southern parts of Finland, which on the map appear as a lacework of lakes and rivers.  I don’t feel we’ve even scratched the surface of what the country has to offer.  But who knows, someone in tourism might on day wake to the fact that their neighbours are experiencing a tourism boom but Finland is missing out.

As we leave, we’re very much in farmland.  Farmers are in the process of ploughing fields revealing an inky black soil that looks the stuff of farming dreams.  I spare a thought for the embattled people of our farming communities who seem to be regularly, unfairly, hit with either drought or famine. In a world that’s often a dust bowl,  they’d look at that rich black soil in wonder. 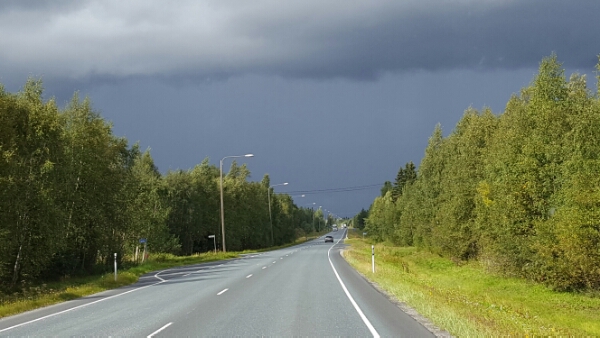 We’re also treated to a last Finnish lighting show – sunlight through black clouds one moment, impossibly blue skies with cotton ball clouds the next.  There’s something quite rarified about the light in the far northern hemisphere in Scandinavia – I find it mesmerising. 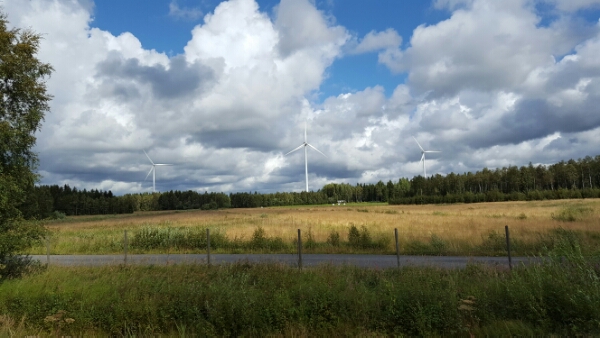 The farms we pass have a proliferation of structures upon them. The main house, of course, often a smaller pretty cottage, a guest house perhaps, a barn, a storage shed, a structure for the endless cords of wood, and very often a cute little building, often round with a funnel roof – the sauna.  I’m guessing that the controls around what you are able to put on your land are a lot more flexible here.

Many of the buildings we see are the classic Scandinavian red, the Finnish houses a little darker than the Norwegian.  In Norway, I had presumed the proliferation of red, white or blue houses tied to their national colours, but that doesn’t explain the red houses everywhere else.  In my tradition, I turn to Google, which informs me that red is a traditional paint, made at home in times past, a mixture of ochre extracted from rock and fish oil.  The resulting red paint not only coloured, but also protected wood via the oil.  Red was the easiest and cheapest colour to make, yellow, a less frequent but occasionally seen colour, especially in formal buildings, more expensive, and white most difficult and therefore most expensive, reserved only for the wealthy.  Amusingly, some people took to painting their public walls white or yellow, leaving the non public exteriors red.  Keeping up with the neighbours, old school style.  The traditional colour holds, clearly, despite paint now being a matter of driving to the nearest hardware store.

Finland has certainly offered up a gorgeous array of stunning creatures, my squirrel, countless reindeer, huskies and of course the wonderful collection at Ranua Zoo.  We get a last Finnish furry treat today, two groups of reindeer trotting across the road, the latter, a mother with the prettiest baby reindeer I’ve seen.  Unlike the brown or white ones, she’s a every shade of white, cream and milk chocolate with big brown eyes and huge eyelashes.  Pretty, pretty girl.

We travel towards the town of Simo, on the coast of the Gulf of Bothnia.  This coastal road hugs the Gulf, becoming the E4, crossing through to Sweden at the town of Tornio.  We cross through early afternoon, without fanfare.  Not even an unmanned crossing control, just a huge Ikea!

Sweden is almost immediately different, a lot less wild, more open farmland, and endless fencing to keep reindeer and moose off the roads.  The signs for moose in particular are constant, but despite keeping my eyes firmly in the forest, we see none.

Having made the crossing at the top of the Gulf, we again head south along the E4, heading for Gammelstad, a church town with a rich history.

Gammelstad is UNESCO listed as it is the best preserved example of a church town, one of only 16 that remain of an original 71 in Sweden.  The other 15 are mostly ruins. Gammelstad is most fortunate to not have had a major fire in its centuries old history.

Interestingly, in the 14th century, Gammelstad sat upon a tiny  island at the mouth of the river Lule, with a harbour at its edge.  The land has risen an extraordinary 7 metres since,  Gammelstad is an island no more.  The land rising pushed the river far past the village; it continues to rise at the rate of 1 metre every 100 years.  Amazing! 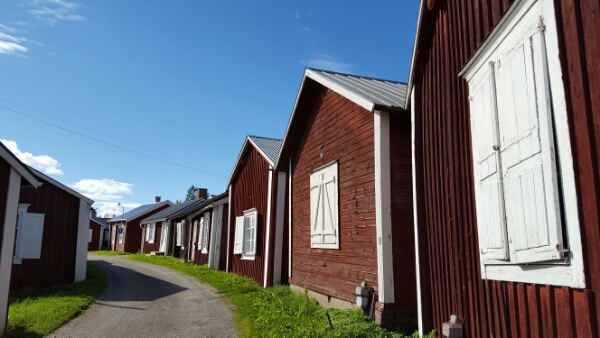 Church towns were borne of need.  The need for people to travel long distances to church, and the extended nature of parishes meant that travelling to church required accommodation.  The original church was built in the 14th century, the year 1339 is recorded as being the first year of services.  In support of the parishioners, a series of one or two room cottages were built around the church, progressively added as the need arose. The cottages are tiny, offering carriage bunk beds, fireplaces and the most basic of accommodation.  Gammelstad ended up with 408 cottages, comprising 553 rooms. 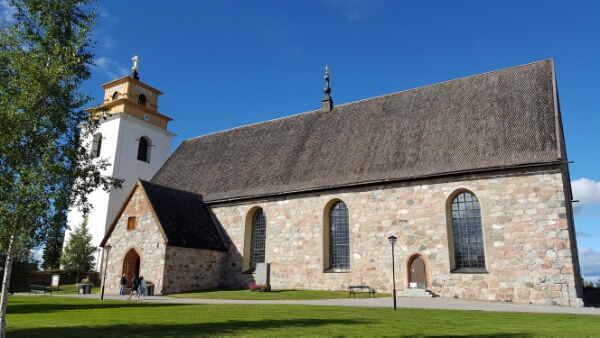 The present day church is a stone masterpiece, sitting on a rise in the centre of the cottages.  It was built in the 15th century, finished in 1492 with 40 different types of external stone creating beautifully coloured exterior walls.  The church is very elaborate for its time, reflecting the wealth of the farming community and Parish when it was built.  Inside is a very intricate altar, reflecting the passion of the Christ, late medieval frescos and an intricately decorated wooden pulpit. 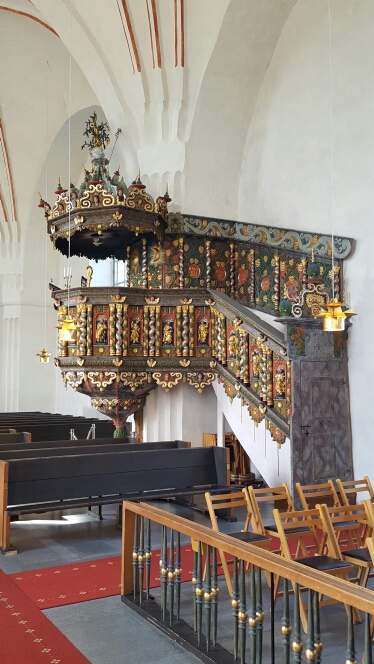 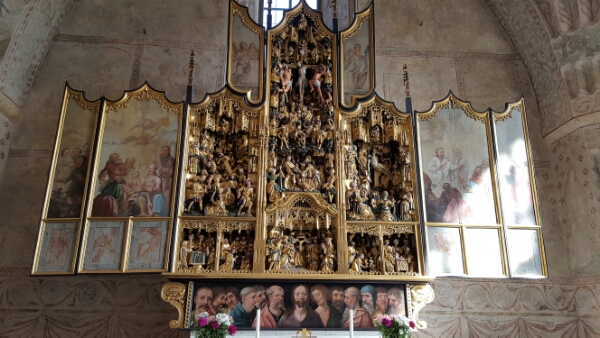 It’s a perfect afternoon to wander about, exploring Gammelstad, sneaking a cheeky icecream (there is a vanilla/ liquorice flavoured drumstick here!) and generally just enjoy a break from driving. Without any formal itinerary, finding gems like Gammelstad is always a lovely surprise.