For someone who’s an animal lover, today was indeed paradise.  So many new creatures, either unattainable in the wild or much loved and searched for but never found, right there in front of me.  One even at my fingertips…but more on that later.  Even hours later, as I write this, I’m still so excited it’s all I can do to stop wriggling to sit still enough to write.

We spend most of the morning traveling to Ranua, to the zoo.   We arrive just in time to see the bears being fed, or so the ticket lady tells us.  I fly up the hill, determined not to miss it, Chris in hot pursuit…but everyone is asleep.  It seems her words were mixed up.  Not half an hour left of feeding… half an hour to go.   There are two polar bears, a huge male and a second smaller female snoozing peacefully on one side, and brown bears the other, sleepy, but one eye firmly on the door.

The keeper arrives with fruit and carrots, everyone leaps into action.  The bears have apparently been feed their meat in the morning, away from little eyes.   The male polar bear dives into the water and puts on a wonderful display of bear, master of his domain.  He’s magnificent, standing on his hind legs, paws the size of hubcaps, his size and strength breathtaking.    He’s a big fan of the apples, dispatching them in a bite, and fishes for carrots from the bottom of the pond, gently balancing them on top of his paw into his mouth.  His tongue is black. Black!  I have binoculars and get a front seat view.  In the binoculars, he’s the size of a truck, I can see everything up close, even his teeth.

His buddy does laps, looking on.  Her tummy’s full of meat, apples and carrots are not her cup of tea.  I can barely tear myself away to see the brown bears fed.  One is an absolute comedian, rolling into his back holding his back paws with his front – bear pilates.  He’s very cute and hoovers up his fruit lunch, especially the grapes.

The bears have set Chris’s stomach off – he wants lunch too.  We head back to the restaurant, via the bird enclosures and past wild boars snuffling through their lot.  The first bird building delivers a wholly unexpected treat – four baby beavers, eight weeks old, delivered by C section, being raised by the keepers whilst their mother recuperates.  They’re being filmed for a news show and try to bite the camera man.  His shoe takes a chunk but he saves the camera cord just in time. Oh my goodness, they are so cute!  Tiny little fluff balls with flat tails and quite strong choppers for their size.  They squeal “wheeee” as they argue ownership of a carrot, despite there being many others.  I’m desperate for a pat but the keeper is in with them and I dare not risk it.  One braver than the others crawls up the keeper’s leg, peers into the camera, and delivers  an on point media briefing like a pro.

An hour in and 10% of the zoo explored, I have a very good feeling about this place.

On the way to lunch we pass enough types of owl, large and small, most in pairs, to cast a new Harry Potter movie, including 4 snowy owls (Hedwigs), a huge eagle owl and many others.  All are awake and alert, peering down on us wisely.  We also see grey cranes, different types of eagles, a buzzard and ravens.

Lunch is another home cooked delight, a buffet of local dishes.  Rather love that you can get a meal like your mother would make, as opposed to the usual junk food on offer in public places.

After lunch it’s back on safari.  Adult beavers slumber peacefully, piled up on each other, as do the otters.  These boys are huge – european otters, vs our local small clawed Asian otters.  Back to visit them later then. 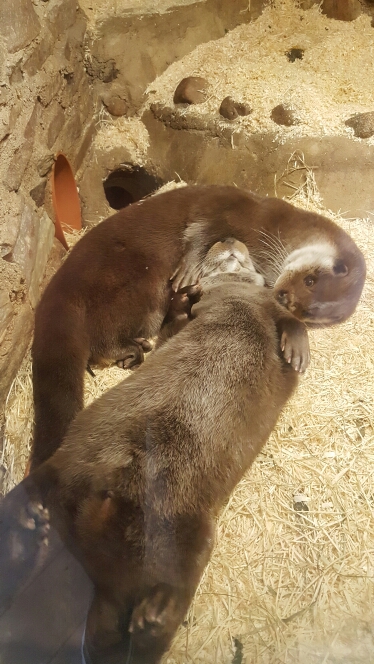 In the meantime, I’m bursting to see the wolverines.  On my “must see” list for ages, I’ve only ever seen them in a documentary.  On the way, we pass what I’ll call Weasel Central, indoor/outdoor cages boasting an American mink, a weasel, a stoat, a European mink and a pine marten – all on my must see list, especially the pine marten who has eluded me on hikes for four years, ever since I knew of their existence. I spend a lot of time with my eyes in the trees looking for creatures.

We catch a glimpse of one mink but despite poring over the cages inside and out, we can’t see anyone.  So many places to hide.  We do see lemmings, tiny hamster like creatures.  On to wolverines!

There are three of them and even watching them is exhausting – they’re pure  energy, constantly in motion.  Up trees, into ponds, down holes, back again, into the water, into the nest, no, the tree, no,  the rocks, look, something to eat. Look, a bird, oh, a person, oh, another wolverine.  It’s like watching three children with attention deficit disorder after a day on red cordial.  They’re fabulously powerful too, with short legs but paws to rival a bears. With incredibly strong teeth and jaws,  they can bite straight through serious bone and even meat frozen solid.   I want one.  A savage beastie of my own.  The binoculars, a great purchase, again give us an “up so close you could touch” view. Their faces are so expressive up close.

The wolverines are neighbours to a number of sleepy large lynx, one at his bath, wolves, masters of disguise, cannot be found despite an extensive search (their enclosure is huge) and dhole, which is a type of Asian dog, looking very much like a fox.  A creature I’ve never heard of.  They’re quite cute in a doggy, foxy, don’t I have a nice tail kind of way.

Best to check on the bears again too, after all, how often do you see a bear, especially a polar bear? And Weasel Central…no luck yet.  It’s off instead to visit our foxy friends.  We see red fox cubs, nose to tail, a raccoon dog, originally from China, but introduced to Finland in the 1930s, another creature I’ve only seen pictures of, and only recently, at that.  There are Artic Foxes too, but they’ve been colluding with the wolves and are not to be found despite three return visits to their enclosure and a good look through the binoculars.

Weasel Central is still a vacant lot too….

We also see a musk ox family, complete with baby in tow, mother moose with twins, roe deer, red deer, fallow deer with a spotty Bambi, domestic reindeer and wild reindeer – the latter are the finer featured ones we’ve seen on the road here from time to time.

Absolutely everyone is very well cared for with large, well  maintained enclosures and thoughtful suppers provided. Humans tread a path above or alongside enclosure edges, giving great cage free views.

By this stage, many laps later, Chris is dragging and announces that he’s done, despite my pleading to visit Weasel Central again.  I am totally determined to see them, so I set off alone.

On the way back I get lucky, the beavers are up and about at their supper of branches.  I see one swim underwater using his back paws and tail.  The ottters are all atwitter too, swimming in their pool.  In the very late afternoon, everyone comes alive it seems.

I hold my breath and run to Weasel Central.  Oh. My. Goodness.  My patience has paid off.  Over the next hour.  I’m treated to the following.  The weasel is out – he’s tiny, tiny, tiny, no more than 3-5 inches of fur, no wider than my thumb, cream belly, brown on top.  He’s lightning, and I mean lightening fast and can shrink or lengthen himself in a way that defies gravity and belief.  He has such a pretty, pretty face as do all the little weasely creatures. 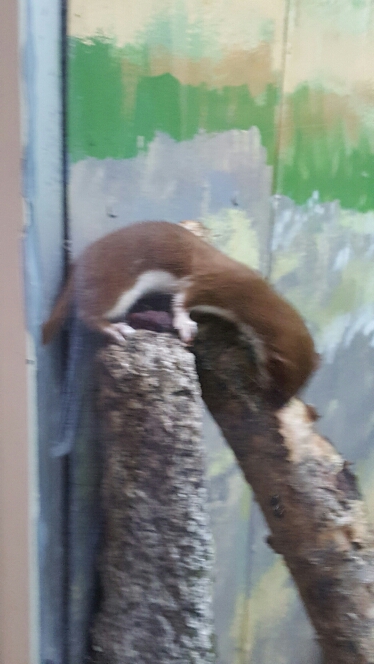 The stoat is out too, intially snoozing in his deck chair (really, a stoat sized deck chair) then eating his supper.  He’s larger than the weasel with enormous whiskers but essentially the weasel enlarged.  If we were here in winter, he’d be pure white and called an ermine.

The European mink is about the business of his bath, bolting around his enclosure and twirling in his pool putting on a a spectacular display.  His coat is a stunning deep chocolate and he has a white band on his nose.  He responds when I call him. 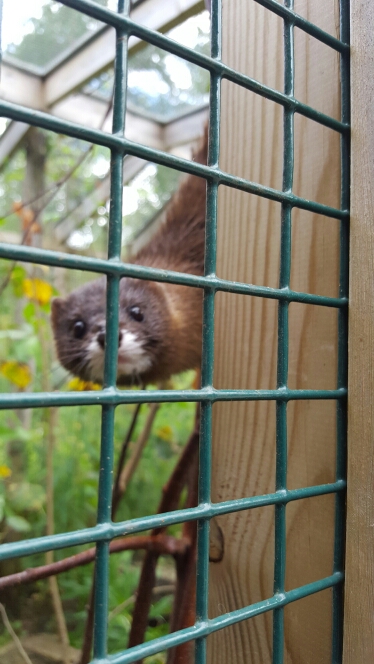 The pine marten, the most elusive of all, is actually out too.  I round a corner to see him and he freezes, he’s been caught short, no bolt hole.  He looks like a cross between a cat and a weasel with a brown body and cream trimmed ears and face. He was worth the wait.  I play hide and seek with him for ages as he hides behind rocks then peers over from time to time to see if I’m still there. He comes out fully twice, but only when I hide. 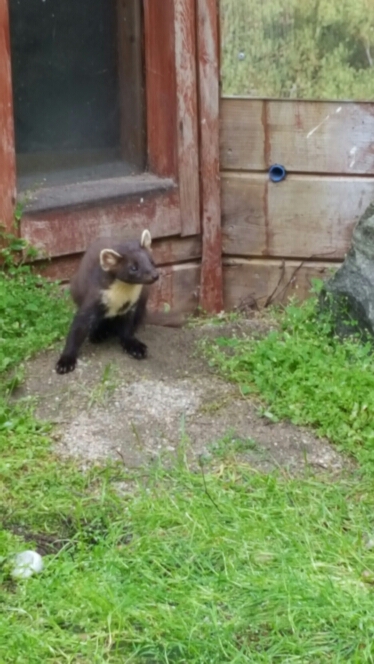 The American mink, in the meantime, is playing a furious game of chasing his own tail, rolling into an endless ball, a game with no winner.  He’s very responsive when I call and chases first my fingertips then me from one end of the enclosure to the other. I think he likes having a playmate.  There’s no one around, I take my chance, resolutely ignoring all the signs about biting.  I coax him up high, above where the glass guard is, so he’s holding on to the coated wire.  There’s a paw pad in reach and I go for it.  It’s pinkly soft and squishy, a tiny button of a thing, and at the end of a very surprised mink who at first bolts, but then comes back when called.  This time, when he comes up, I brave a tummy tickle – it’s just there, begging to be touched.  It’s oh so dense and soft and comes with a very swift u turn – who’s touching my tummy!!!  I risk an encore, successfully, but then decide my luck will probably run out – he’s so fast I dare not risk a fourth attempt.  Smart too – I think he’s worked my modus operandi out.

I take many, many photos.  Videos too so that Chris doesn’t miss out.  I so wish he’d persisted and seen it with me.

I skip back to the car, bursting with victory and news, beyond excited.  It’s been the best day.  Perfect weather too, despite rain being forecast.  Chris drives  a little further south with me twittering in his ear.  I wish he’d been there.