Well that will teach me for commenting on how mild the weather has been.  Today’s weather is straight off the ice, a chilly 10° without the wind chill factor.  Fabulous!  Arctic weather at last!  I think I would have felt a little cheated without a taste of ice.

The real challenge of the day is getting into Tromso.  The plan is to get on the bikes for a ride across the bridge, but this proves more than a little problematic.  We’re dressed for cold, but not the cold at the very top of the exceedingly high, very archec and very long bridge.  By the time Chris comes off, he’s frozen. I freak out at the height/high wind combo and have to get off and walk, eyes firmly on the ground. Terror trumps cold.

In the wild weather Tromso is a little deserted.  We stop for an excellent coffee and light lunch by the harbour.  I have a heavily seeded roll with a thin slice of gjetost.  It’s a Norwegian specialty, a caramelised goats cheese which I love, Chris a pannini.  The plan is to go out for a fancy dinner tonight.

Tromso is very pretty.  It’s set on an island at the junction of the Grotsundet and Ullsfjorden waters, linked to the mainland by the terrifying bridge, the Tromsbrua.  It has  the reputation of being “the Paris of the North”.  Located some 300 km north of the Artic Circle, it is on the same latitude as northern Alaska.  Tromsø’s history dates back to Viking times with religious fervour then taking hold from the 1200s.  It’s been a market town, a sea port for artic trade and is famous for being the starting point for Nansen’s and Amundsen’s polar expeditions.

Most of the older buildings are indeed quite Parisienne in nature, if Paris was build in wood in the 1800s. Here and there, a copper roof appears lending creedence to Tromsø’s francophile claim. There’s a white reindeer out front of one shop, and a polar bear guarding the entrance of another. 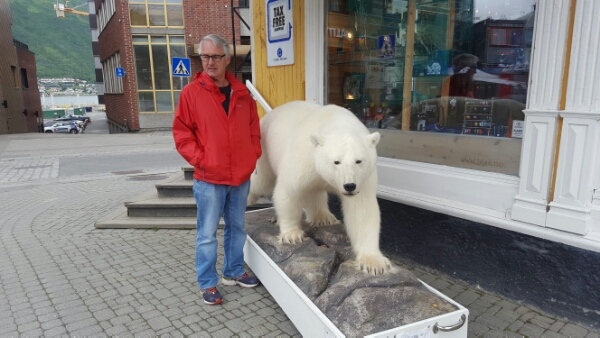 We scope out dinner options and book Emma’s Drommerkjokken, where the chef is recommended as the best known chef in northern Norway with a specialisation with local ingredients combined with exotic flavours.  It ends up being an excellent choice and also has a lovely outlook onto the Domkirke.

With drizzle and Artic conditions the best place to be is indoors.  We visit Polaris, which is the national centre for polar research and information.  Pleasingly, it delivers two things that will be missing from our trip: two panoramic films, the first showcasing a stunning display of the northern lights and the scientific explanation behind them, and the second a birds eye view of Svalbard and its flora and fauna. It’s clear that any visit to Svalbard will need a helicopter flight to do it justice.   We’ll miss the northern lights as they can only be seen in winter night skies and we’ve decided to give Svalbard a miss due to logistics and my preference to see it in winter.  The films make up for this a little, but do make me more determined to see both in the future.  Polar bears, artic foxes, seals and endless ice.  My kind of place. 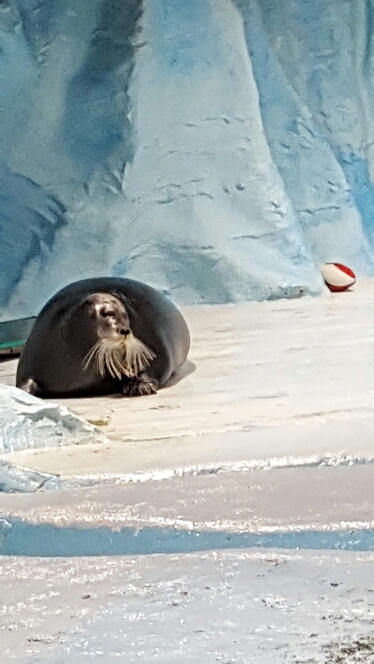 Best of all, Polaris has four seals – two spotty sleek harbour seals and two enormous bearded seals with walrus proportion whiskers.  The harbour seals are lightweights at 70 kg, the bearded seals are a massive 290 kg.  The seal pool has a glass bottom you can walk under which is very entertaining and we get to see a feeding and keeper interaction late in the afternoon.  It’s not a seal show, more enrichment to cut the dullness of life in captivity.  Not much is known about the bearded seals as they are solitary in nature and therefore hard to study.  It’s thought they are suction feeders and a study is being conducted on them.

Our four though have no shortage of fish.  They each have their own fish bucket and they know it by the design painted on the front.  The male harbour seal doesn’t let his out of sight and clearly knows when there are treats still inside.

It’s still drizzling when we emerge so we head back to return later by taxi, glammed up for dinner.  I mentioned it proved an excellent choice.  King crab bisque laced with whisky, pan fried seith with white asparagus served with a Bordelaise sauce and a divinely buttery mash, white chocolate mousse with a strawberry and rhubarb compote for me and a dessert platter for Chris.  A French chardonnay from Langeudoc and an desert wine complete what is close to a perfect meal.  Just the small matter of the second mortgage for the bill….  Well worth it. 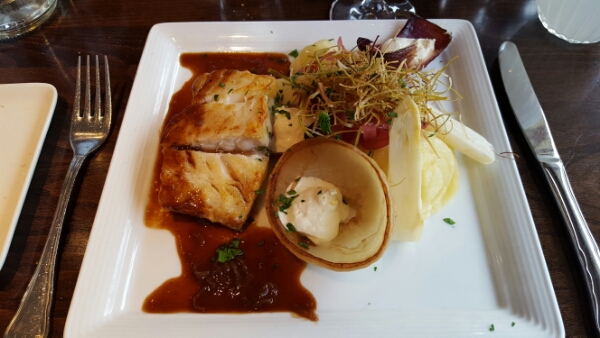 Despite the weather, it’s been a great day.