We bid a reluctant farewell to our stunning view this morning.  The morning light has changed it yet again, rendering yesterday’s vivid blues a silvery grey. Today’s journey will see us cross the last of the Lofoten archipelago, back onto the mainland. The crossing takes place on the Tjeldsundbrua, a kilometre long road bridge with 76 metre towers that links the last island, Hinnoya, to the mainland.  The Norwegians do good bridge. 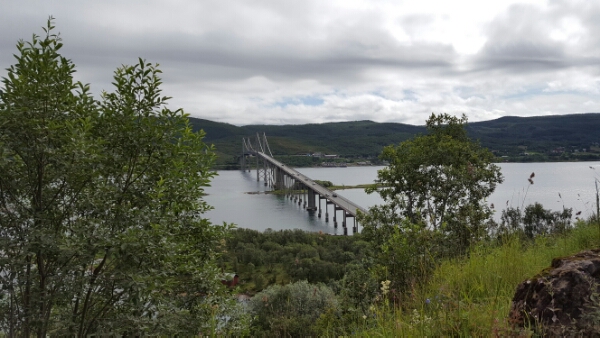 Hinnoya is heavily forested, but still with the stunning water views across fjords, lakes and streams that Norway is blessed with.  Here, it seems that everyone gets a million dollar view.  The snow capped mountains are back too, but in the distance – no terrifying mountain passes today.

The elk/moose signs continue to tease us, but no sightings.  Wildflowers pave our path, now joined by daisies that look like a sprinkling of snow as we zoom past.

This area was part of a major WWII battle Narvik in 1940; monuments commemorating key places are dotted along our trail.

The mainland also sees us off the E10 scenic route through the islands and back on our old friend, the E6, ostensibly on our way to Tromso with the aim of arriving in the afternoon.

These plans though are happily disturbed by signs for the Polar Park.  Much pleading to stop. Having been teased long enough by signs for non existent moose and reindeer I want to see them up close.

Chris gives in and we pull in.  There’s always a moment of tension when I go into a private zoo, when I hold my breath and hope the best for the welfare of those inside.  Luckily, this place passes with flying colours.  The animals are uniformly well cared for with glossy coats, well fed tummies and massive, natural woodland enclosures.

The Park is set into the mountain at a steep incline and we have to work hard for our sightings.  Not only are the enclosures huge but they’re “off road” over boulders and through swamps- the best chance of a sighting is up or down  steep embankments, along  skinny walking tracks that skirt most enclosures.

We’re well rewarded for our efforts.  We see deer with a spotty Bambi in tow. She keeps getting told off by her mother when she shows a little too much interest in us. And reindeer, five!   Three in the distance, but close enough for a good look, a stunning buck with antlers as tall as he is high and best of all, a doe who lets us approach within a metre of her, with only a small “toof” of her hoof to warn us that that’s quite close enough, thank you. She’s stunning with a chocolate coat, creamy undercarriage and gorgeous girly velvety antlers.  Huge brown eyes.  Pretty girl.  The reindeer roam free in woodland in the park – we’re really lucky to have seen them.

The day’s treats do not end there.  We see two sets of brown bears, one family dozing in the sun, butts and bellies on display.  Lots of glossy milk chocolate teddy goodness.  In the next enclosure, two young bears give us the second treat for day.  Two young bears, one light brown, one an unusual golden tone amble along in companiable beary silence, until one takes a nibble of his buddy.  This provokes a 10 minute good natured wrestling match, inches from us.  Beary bliss. 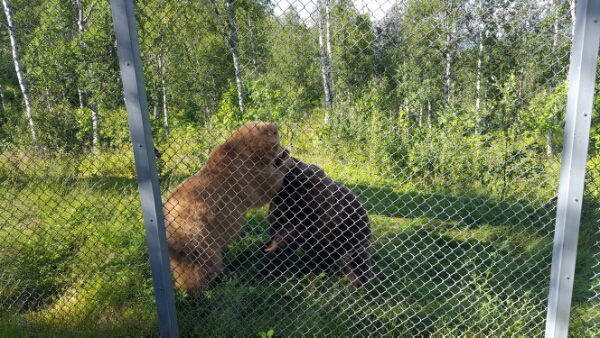 We also see two lnyx, who are much smaller than I thought they would be, with stumpy striped tails.  They’re close after a hike up to the enclosure’s edge, but the binoculars give us an extreme close-up.  Musk ox doze in the sun nearby.  Try as we might, despite much circling, the artic foxes elude us and the wolverines, sadly are not on display – their enclosure is getting an overhaul.  I’m not sure how, it’s essentially wilderness.  I would have loved to have seen a wolverine.  We do see wolves though, resting in tall grass.

The day’s last treat comes as a surprise.  We scour another open woodland, looking for moose, to no avail.  By this time its been a few hours and we’re both tired from the up and down terrain, ready to call it a day.

As we step out of the woodland though, there’s our moose, taking part in filming a Belgium childrens’ film.  Not only is he a movie star, but he’s truly Mr Magnificent.  Much, much taller than us, with enormous chocolate velvety antlers then on top, he’s stunning.  He’s not too sure about this film business – they keep bringing him forward with carrots but rarely make good on the offer.  The child who’s meant to be patting his nose is clearly scared of him and many takes are called for.  The moose soon tires of this and comes over to see if we’re a better offer.  He has such an expressive, mournful face, I’m sure he’d happily accept a pat, but the film crew are anxious and fretting that he’ll bolt from view if spooked.  We settle instead for lots of photos and I chat to his keeper who tells me it took them four days to coax him into the enclosure from the free range section.  In the end, he only came to the gate when they’d given up – as if he had enjoyed the “catch me if you can” game and wondered where they’d gone once they stopped.  He also tells me about the antler cycle of “furryness” which is then rubbed off each year in October, growth of a new “horn nub”, then the fuzz regrows.  In all, he will grown around 20 horns.  I love them fuzzy – he looks like a toy come to life.

It’s early evening by this stage and we decide to stay at the park.  It’s a great setting with cliffs in the background and a fast river below.  There is no night, as usual, but the twilight sky that keeps me company into the wee hours is punctuated by the occasional yips and calls from my friends above.  From time to time I catch the scent of the male lynx, reminding us all that whilst he’s small, as far as he’s concerned, he’s king of his domain.