Being in the Artic Circle brings a few surprises.  It’s not the wilderness one might think.  It’s wild, certainly, but over 50,000 people live and work here, no doubt fettered from time to time by the weather.  I’d love to see it in all its winter white glory. 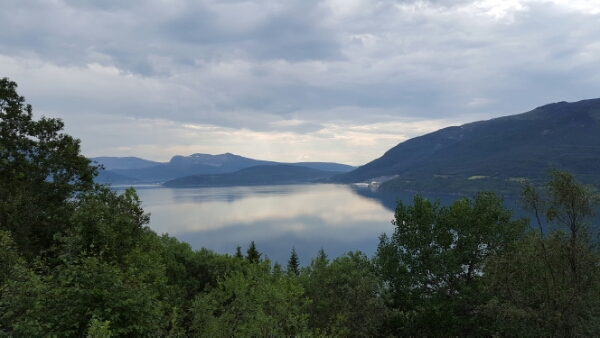 It’s summer though, and the flora and fauna are making hay while the sun shines.  Everything that blooms does, bees and bumbles are busy setting winter stores down, birds are lazily circling, long journeys south for winter, a mere future problem to be addressed. And…it’s a warm day, one of the warmest we’ve had.  It’s no surprise the polar bears are suffering.

At this point in our journey, we should take a turn west, to the coastal northern capital of Bodo, but in the interests of peace, we continue 30 km north in an attempt to find the Rago national park.

It’s a lesser known one, part in Norway, part in Sweden, together forming the largest nature reserve in Europe.  We have a rough guide to location via a brochure but it proves futile. Either we miss the turn or don’t see it.  Here, vehicles are forbidden in national parks, so entrance is a bit of a mystery. TomTom proves no help either, in typical computer logic, deeming it a place the motorhome is not allowed to go, therefore nonexistent.

We can see it around us, but no hiking trails in, only clifface.  At least the furries in their are well protected in their isolation, hopefully making lots of fuzzy cubs and helping stabilise population levels.  I read some bitter truths about the decimation of the Artic fox until its protection under law in 1930.  Numbers are still struggling, with only a few left. I hope they make it.  Habitat and protection are two good first steps.  If anyone needs a foster mother for cubbies, or there’s a chocolate in winter, gloriously white in summer fluff ball who’s sick of living rough and catching their own snacks….they know who to call!  Have lap, will love and cuddle…

(I’m cheating here, it’s an internet photo…but look at them!!!)

Anyway, not finding the national park has the side benefit of driving along the fingers of the breathtaking Finnefjord and Vestfjorden.  It’s glass still on the way up with vast expanses of water surrounded by mountains, but on Chris’s side of the car, making photography impossible.
The only challenge of the additional distance are a few terrifying tunnels.  Now I like a good tunnel as much as the next person, saves time, fabulous engineering, no plumet to your death down the mountain pass, etc.  But you haven’t truly been terrified until you enter a curved tunnel, preceded by two ominous signs… “dark” and “narrow”.  When they say dark, they mean dark – edges, centre, my side or yours, where there hell is the road, these concepts lose meaning.  As in no light, period.  And as for narrow, well that’s a walk in the park when you have a zippy little VW, but when you’re a 5 tonne, 3 metre wide beast, less so.  Add a few monstrous trucks screaming through at speed in the other direction, also in the dark, and you really know you’re living.  And possibly close to dying. Even Chris admitted to terror. Good times.

Once the park is deemed a lost world, we turn and I get my chance to photograph the fjord on the way down.  It was definitely worth the drive, it’s a photographer’s dream.  Not as glass still as it was on the way up, it’s still a thing of utter beauty, constantly changing each time the light does.

We make it into Bodo by mid afternoon, just in time to catch a ferry to the Lofoten islands, first step Moskenesøya, approximately  100km west.  It’s from here we will continue north, to the very top of Norway.

It’s a long crossing, some 4 hours, but helped along by watching a pretty boy gorgeous Samoyed getting pats from virtually every passenger on board, me included.  Mozart, as I find out, is 1 year old barely out of puppyhood.  He’s a beautiful, loving boy and accepts all the attention gracefully with a good dash of puppy joy.  With his polar white coat and jet black nose, I think he’s the closest I’m getting to a polar bear on this trip.  It’s a pretty good consolation prize.

We arrive early evening in thick fog – a tugboat has to guide us.  Having settled for the night, we go for a brief exploration.

The fog has hidden a treasure trove of delights.  The island archipelago is surrounded by mountains and sheer cliffs that reveal themselves breifly when the wind shifts.  At their base, an historical, working fishing village, complete with hundreds of drying racks.  What we see is stunning.  I can’t wait to explore it in the morning.