The morning starts with a hike up to the headland, through woodland.  Lots of spruce and pine, but despite evidence of nibbling, no squirrels to be found.  Lots of lovely birds though, including an oyster catcher very busy on the shoreline.

The plan is to continue the long drive north and enter the official three Nord regions.  It’s not until you start this drive that you gain a true appreciation of what a long country this is.  In Australian terms the distances are long, but appear quite manageable.  This illusion fails to take into account the narrow roads and steep mountain terrain where speed is necessarily restricted.

The last of the 3% arable farm lands pass us today, we’re soon again in stunning forests, bisected by lakes, streams and the occasional fjord.  At one point, we’re driving through clouds, rendering the air thickly soft and damp. 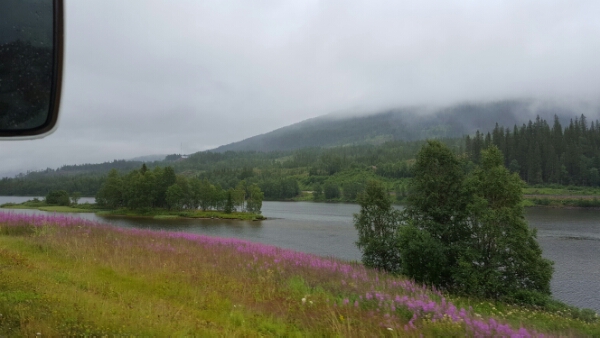 Rain sets in by late morning and holds until late afternoon, bringing both highs and lows. The highs are the landscape, washed clean, the misted view and still waters, interrupted only by raindrops.

The best high of all is an elk sighting. Having been teased by elk signs for miles, we finally see one, rendered a deep chocolate by the rain, grazing in a clearing.  He’s pretty spectacular.  I’m still lamenting the lack of a photo – I had the guidebook in hand as opposed to the camera and with traffic behind us there was nowhere to stop.

Hundreds of motorhomes pass us in the opposing direction.  It’s clearly a popular way of travel with many from the Netherlands, Denmark and Germany mixed in with the locals. Wherever we stop, people are fascinated by the fact that ours is registered in the UK, but it’s left hand drive and that we’re from Australia. We meet a nice Danish couple who recommend a pathway through the Loften islands, which they say is spectacular.

The low is a confronting one.  Around a challenging bend, a car has flipped, rolled and landed in a ditch, belongings scattered all over the road.  People have stopped to help and I can see someone being guided by emergency services over the phone.  It’s a sobering reminder of the risks that rain and winding roads bring.  The car is intact, but a crumpled shell.

Thus sobered, we slow a little and don’t make it quite as far as planned.  We do cross through to Nord Norge, northern Norway, to settle by a fjord.  The rain has stopped and it’s a beautiful, warm, still night. 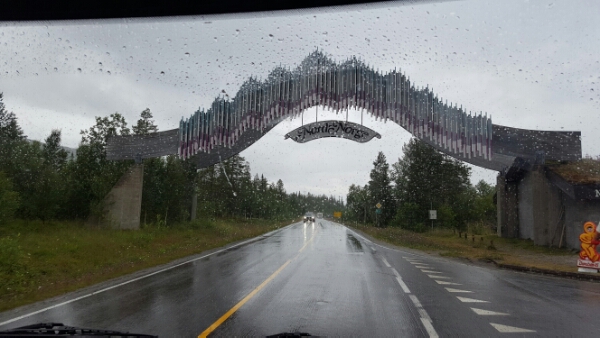 We’re absolutely in the land of the midnight sun. Despite a pretty sunset, it doesn’t and at 1 am it’s still light enough to read outside.