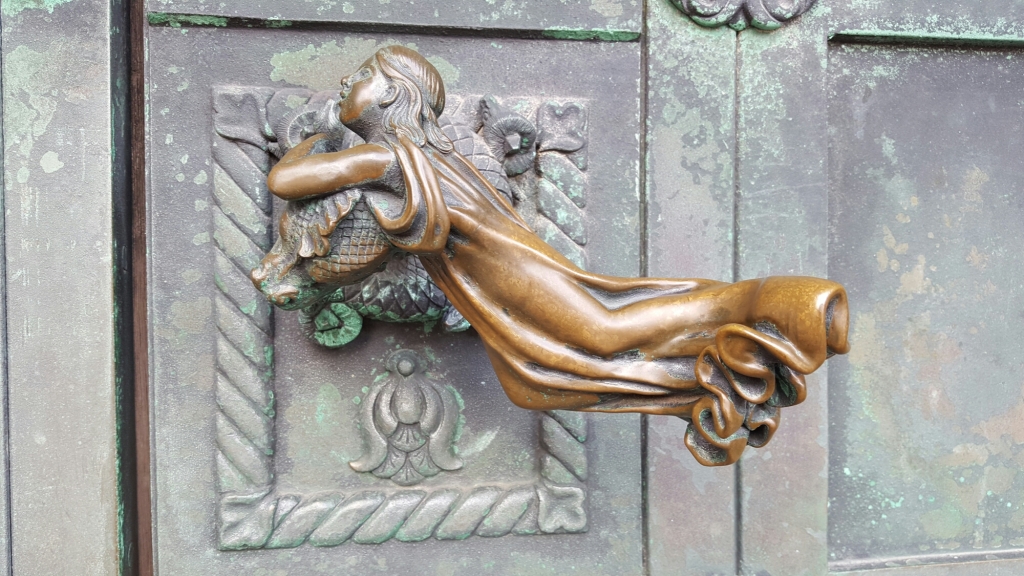 Our journey North takes us to Ribe, Scandinavia’s oldest town.  It’s a picture of charm with its cobbled streets, medieval half timbered houses and a beautiful 12th century cathedral that had its origins in the year 856. Ribe is bustling; the main street is in full swing. 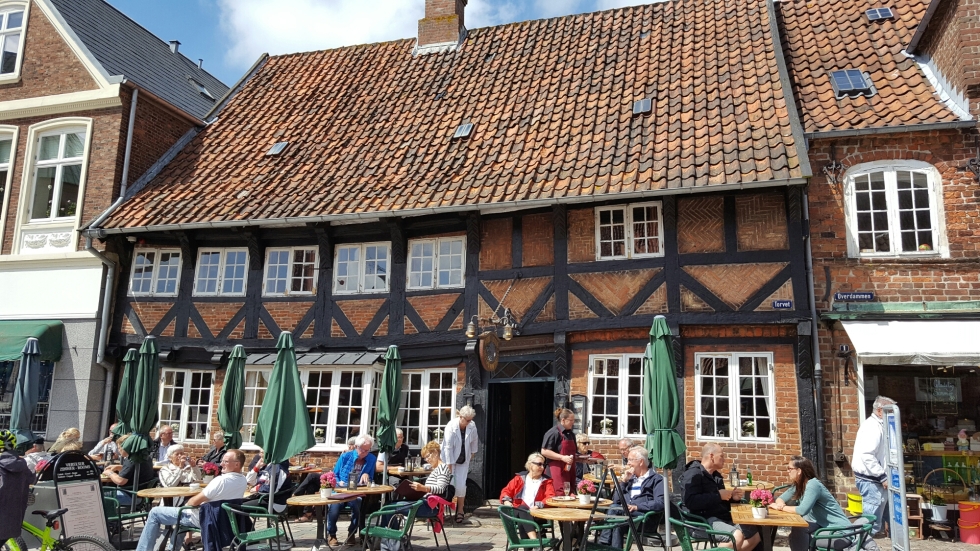 The houses are  riot of colour, many painted in bright tones in sharp contrast to their dark timbered frames.  Many are crooked too, to such an extent that I wonder how they ever close a door.  From an observers point of view it’s very charming, from a maintenance point of view, a bit of a nightmare I suspect.

Ribe is crossed by a series of sluiced waterways, raging on one side, calm the other. One boasts a water wheel, which if I could read Danish, I would be able to tell you about.  Hmmm.  Unlike German where pronunciation tends to be phonetic, Danish has very unforgiving pronunciation rules.  There are hints of Germanic origins hidden in words but detailed translations are a little beyond me I’m afraid. 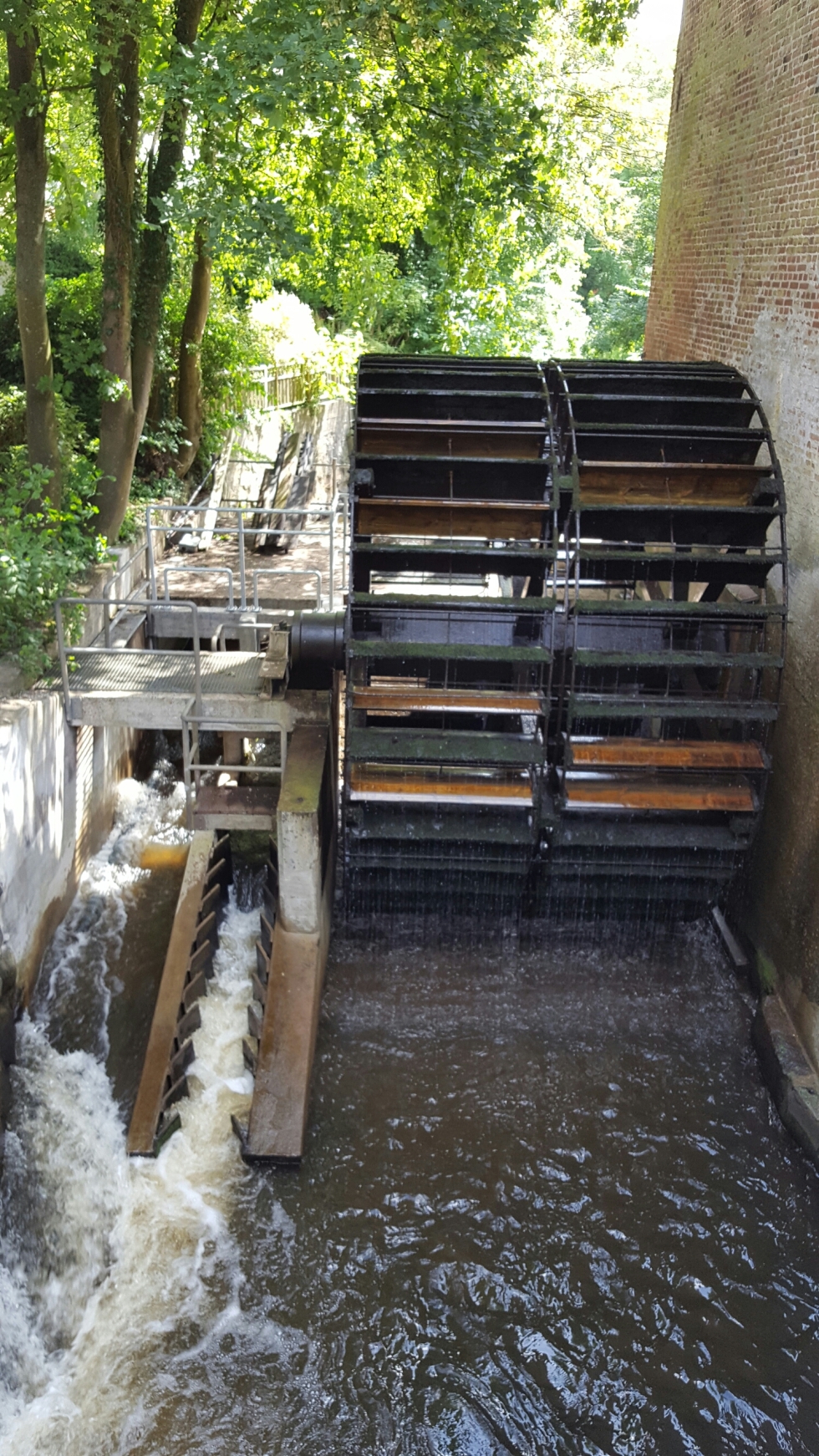 Our next stop is the cathedral, the Domkirke.  It has beautifully weathered brass doors featuring lions, peacocks and eagles, the door handle is a maiden, seeming to be floating underwater.  So unlike anything we’ve seen before.  One side door is the “Cat’s Head” with an impressive lion’s head knocker – this was reserved for the Bishop’s entrance.

Inside, it’s predominantly medieval with vaulted white ceilings, painted frescos and an intricately carved and painted pulpit.  It’s an indication of how many churches we visit that I recognise it as German workmanship.  The modern world has crept in too, with mosaics that resemble Picassos at one end of the transcript.  The church has many granite crypts, dating back to the 1600.  It’s quite interesting to see how spirituality is reflected without the symbolism associated with Catholicism.  The death’s head skull appears often, as do crossed swords.  I’m guessing the message is the dead have fought their battles and now lay at peace.

We pick up a few things for dinner and continue our journey through the countryside.  Farmland again dominates with thatched  A frame cottages. Many people have horses too – lots of palominos.  In the north, even the horses are blond.

I take the opportunity to read up about the country’s flora and fauna, then keep a close eye out for wildlife.  Happily, I’m soon rewarded with not  one, but two sightings.  First, a little red deer, shoulder deep in a grain crop, “borrowing” a snack.  Then a fabulous hare, in serious discussions with a crow, his dark fur and long ears a sharp contrast to the bright greenery.  Very pleased with myself.

Our journey takes us furthest west, to a narrow strip of land that separates the North Sea from the Ringkobing Fjord.  It’s an area of protected status, another wild bird sanctuary.

It’s the first glimpse of truly wild land we’ve seen, tall grassed sand dunes on the sea side, grassed plains on the other.  It’s very beautiful.  Thatched summer cottages of all sizes are dotted sparsely throughout the landscape.

We stop  at Hvide Sande, at the midway point.  The plan was to walk into the town but the rain defeats us.  The wind, straight off the North Sea, is ferocious. Perhaps tomorrow.