We roll into Amsterdam by early afternoon.  The weather is grey again – I guess that’s what you get for complaining about last year’s incessant heat.  Still, given the choice, I’d take cool over heat, any day.

Once we settle, it’s a ferry ride from the north shore and we are in the heart of the old city.  It’s just as fascinating as it was last year, 1,000s of bicycles, busy canals but there’s one key difference.  Last year we turned up on the weekend and it was party central. In between the hens and bucks parties it seemed that half the inhabitants were a little “over refreshed” and the other half were well on their way.

What greets us instead is the rush of tourism, at polar opposite ends of the spectrum.  The young looking to get stoned and hit the red light district, probably to ogle than to spend, judging by how carefully they seem to count their Euro, and the older, maps firmly in hand, the museum and sights in mind.

It’s still busy in the main areas, but nothing like the frenetic pace of last year, when getting a seat in most cafes was a challenge.  It seems we’ve stumbled into the stoner district too.  Barely having seen any dope cafes last year (art, museums, sightseeing, etc) this year they seem everywhere. Acrid smoke wafts out here and there and some people seem to travel with their own personal cloud.  I find it amusing that these cafes don’t combine with some serious munchies on offer.  Talk about a missed opportunity.

Having got the sightseeing out of the way last year, we have less pressure on us.  We wander, taking in the sights and people watching – endlessly fascinating. We luck on the main shopping strip too and enjoy some fabulous homewares and cookery stores and I have get a peek at the forward seasons fashions which seem to lack a firm direction.

We meander happily and dodge bicycles until it’s time to catch the ferry back.  One of our ferry passengers is an old doggie, in his own bicycle sidecar.  He’s got life sorted. 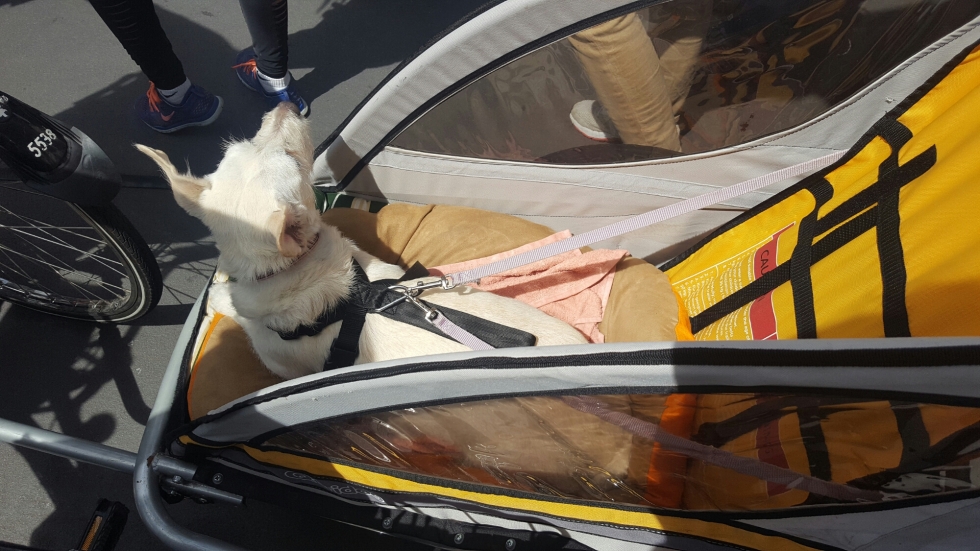