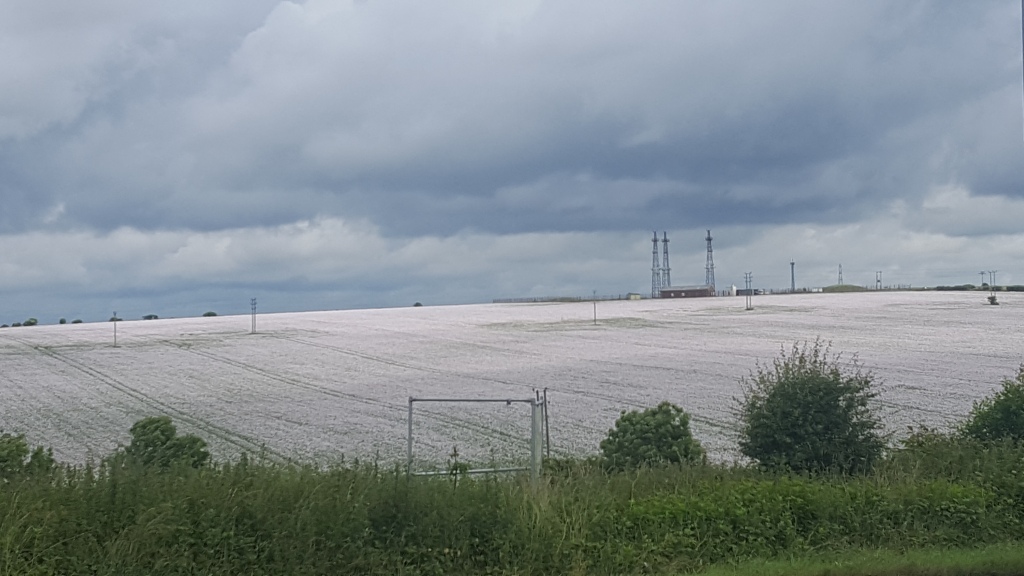 A small break through in technology today, I crack the Chromecast set up which has eluded me thus far.  Having set it up though, the internet speed is too slow to run it.  Baby steps, then.

We drive through Devon into Wiltshire this morning, on our way to have a blackout screen replaced in the door.  We pass through a farming area with all the usual crops, and one with a twist – opium poppy fields.  Acres of pale pink blooms in readiness for harvest.  England it seems, has joined the drug barons.

The poppies are a new crop, Google helpfully advises, bound for both pharmaceutical (the pods contain raw opium) and food use (seeds for cakes etc). It’s a great deal for farmers, all they need do is provide the land, plant and grow. The pharmaceutical companies take care of harvest and transport.  Production of opiates is completed in Scotland.  Judging by the size of the fields, the UK must be stoned out of their minds.

Today isn’t all about the end task, Chris has found another lovely property for us to visit, The Vyne Estate, a Tudor palace that became a family home.

The Vyne, we learn has its origins in the 1300s, but its current history starts in Tudor times. The house was built by Henry VIII’s Lord Chamberlain and subsequently changed and added to each subsequent century by the two families who owned it through to modern times.  It’s fully furnished with pieces dating back to the 17th century.

In its time The Vyne had been host to some rather impressive guests, Henry VIII was a frequent visitor, his Lord Chamberlain attained a level of loyalty from the King his wives did not.  He also brought Catherine on many occasions and Anne Boylen, clearly before he was in a mood to lop heads off.  Jane Austen was a visitor in latter years.  The library boasts a couple of her unbound manuscripts.

Each wing and key room reflects the best of the period it represents.  There is a chapel with stained glass windows, allegedly the best example of their kind in England.  It really seems that no expense was spared in decoration and furnishings.  The centre hall and stairwell is a plasterwork masterpiece, Grecian in style, elegant today still.

House toured, we explore the grounds.  Set along a natural river it’s a pretty walk, culminating in a bird hide overlooking a wetlands.

There’s also a walled garden, beautifully planted with vegetables, a combination of produce for the cafe, allotments and a rehabilitation garden, planted by people in recovery.  What a great idea.

It’s back then, on the road to Wokingham for our repair.  This is no hardship luckily, the repair centre is set in a gorgeous forest, despite being close to London, and is bunny central.

True to form, there are bunnies everywhere on arrival.  I step into a side field to see a sea of tails flashing furiously back to the safety of their burrows.  Eventually they pop back out.  There are lots of babies, silly and frisky.  They’re very sweet, each about the size of an apple.

We both crash early.  The only time I seem to sleep normally seems to be the northern hemisphere.