Grey skies be gone. We rise to glorious blue – the sun is back!

The sun has turned Bath into a new city – I can’t resist reshooting yesterday’s photo of the Abbey. It’s amazing the difference a day makes – look at that sky!

We bolt into Bath, scoff a quick lunch and head straight for the Roman Baths. 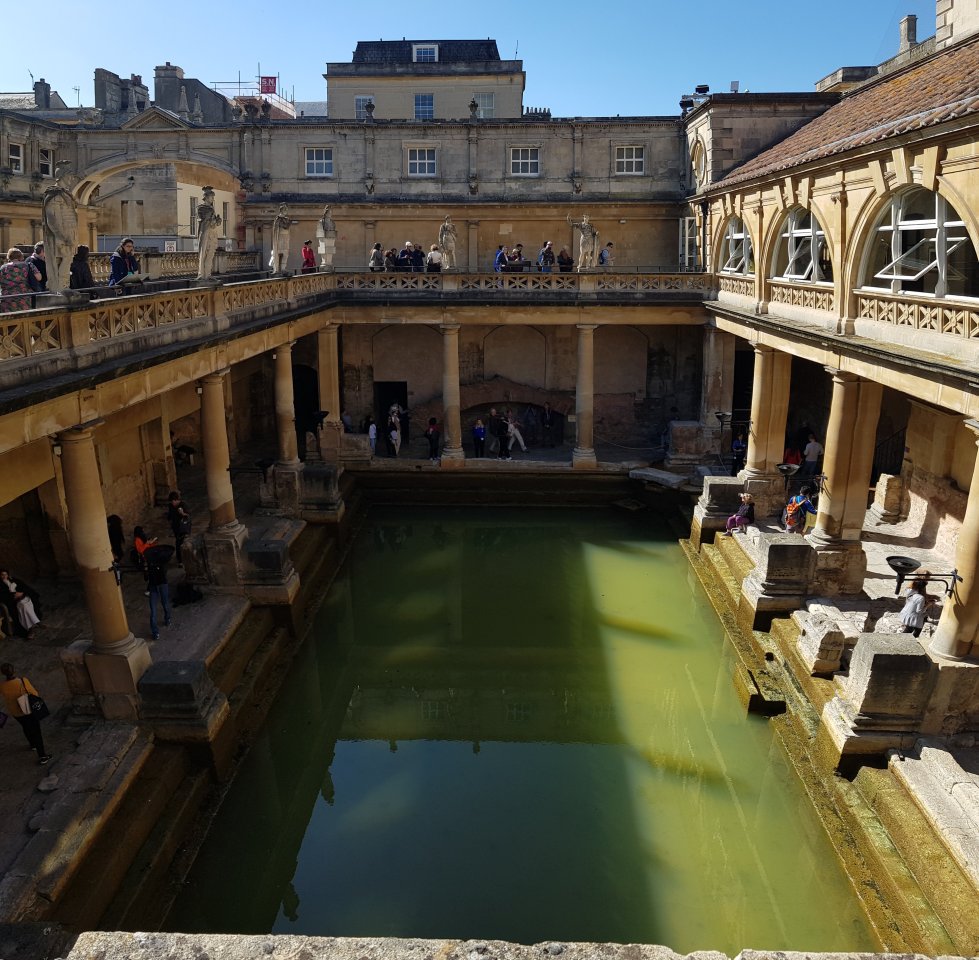 Built in the 1st century when Bath was known as Aquae Sulis, the Baths were only rediscovered in 1870. I’m at a loss to know how they were lost in time – they’re absolutely enormous.In use from the 1st to the 4th century, this was the place Romans came not only to bathe, but to worship the goddess Sulis Minerva.

The Baths remain today, a testament to Roman engineering. Despite almost 150 years passing since their discovery, they’re not as yet fully unearthed – plans are afoot to extend the dig further in the near future. Meanwhile we’re treated to a detailed tour of bathing rituals in Roman times, from the deities guarding the temples,

the seperate women’s and men’s changing, bathing and massage areas, cold plunge pools, steam rooms and of course the hot springs. Which ever way you slice it, bathing in Roman times was a time consuming business. First you rinsed off, followed by a massage with fragrant oils, which were scrapped off with a thin blade. You might then have had a steam, taken a dip in the plunge pool,

or luxuriated in the hot spring.

Most importantly, you would have taken the opportunity to pray to Sulis Minerva, scribing your request onto lead to throw into the spring along with an offering.

Hundreds of these lead notes were uncovered in the archeological dig, along with over 12,000 coins. Some ask for wishes yet unfilled, but most are curses, cast upon those who wronged them – punishment for theft of personal property being a frequent request. Theft was a common problem, if you weren’t wealthy enough to have a slave guard your property while you bathed.Also uncovered were many semi precious stones from signet rings, presumed loosened in the warm waters as their owners bathed.

We’re lucky to view the Baths on a cleaning day – the main pool is being drained.

It’s a rare sight into its underbelly, the sluice gates

that regulate water flow and the steep steps leading down into its base. 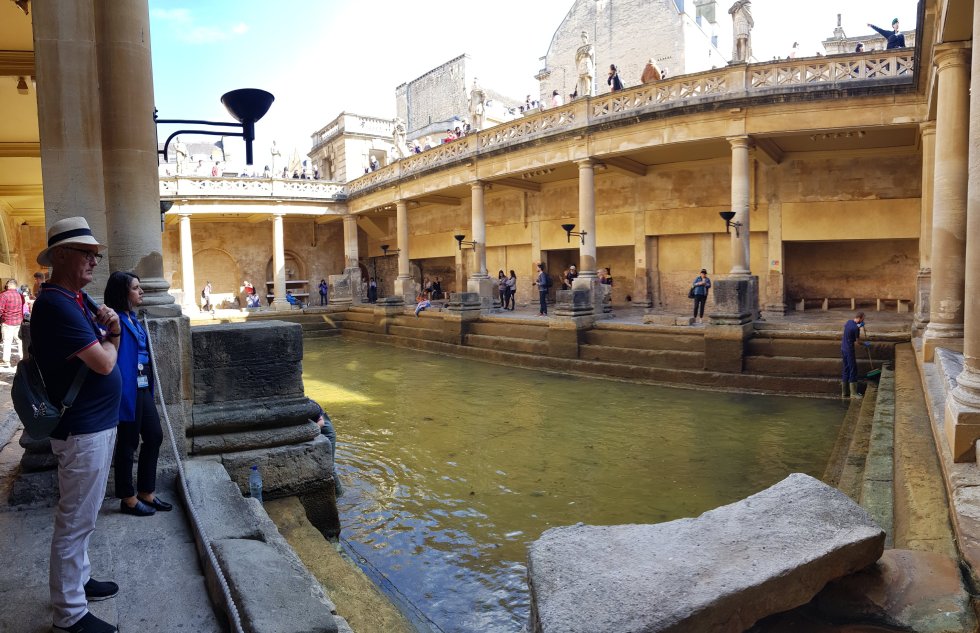 It’s an extraordinarily well detailed display, covering even how the materials to build the Baths were made – the hollow bricks forming the original domed roof, for example

The roof has been long lost to the annals of time – the columns and second story viewing platform we see today were built in the 19th century, after the Baths were unearthed.It takes more than a couple of hours to do the Baths justice, but eventually we’re done. I’m totally fascinated by the Roman era – if I had a time machine, it’s one of the first I’d explore.Post tour, we make our way to the River Avon, to see the beautiful Pulteney Bridge.

Designed in 1769, it’s one of only four bridges in the world to be spanned by shops on both sides. I have a delightful family of enameled silver bunnies from one other – the Ponte Vecchio in Florence.Himself spies a boat tour departing shortly, and as luck would have it, we end up with a private tour up river to the Old Bathampton Mill.

Along the way we learn a little more about Bath’s history, the River Avon’s propensity to flood and that there are otters in the river. Otters!!! I asked, of course.The scenery is beautiful, a welcome oasis from the busy city.

We learn about the weirs, built at either end of our boat ride, to help mitigate the effects of flooding.

By the time we return, it’s almost days end.

and participants in the Jane Austen festival, dressed to impress.

She was one of Bath’s famous residents, as is the much loved Mary Berry, an English cooking icon.Unhampered by rain, we’re treated to a fine view of Bath’s hillside properties on the way back to the motorhome.

The day ends with a gorgeous sunset. It’s been a great one – I feel we’ve done Bath justice this time.