We’re in the Chilterns, an area of England designated for its outstanding natural beauty. Dotted amongst the greenery is one charming village after the other, interspersed with an impressive number of manor houses. Throwing caution to the wind, just for a change, I ask Google what we should do today. “Amersham” it says, “tis most lovely”. Instruction taken, Himself leaps into action. Amersham it is.

It’s not long before we’re there, parked to hike up hill, ready to enjoy Amersham’s history. We find a pop up market in progress…but the Amersham that surrounds us bears no resemblance to the images I saw on line. We pick up some samosas for lunch, and eventually give up, me mumbling about false advertising under my breath, all the way back.

Back at the motorhome,we agree, the samosas alone were worth the trip – they’re awesome, but otherwise defeated, we start down the hill for home. But wait! What’s that sign say? “Old Amersham” that way? Where the hell were we? Turns out we were at Amersham on the Hill, Old Amersham being in the valley below.

And just as promised, it’s lovely. Old Amersham was a market town, recorded in history as far back as the 1086 Doomsday Book, when 14 villagers were noted across 4 land holdings, with 400 pigs. Sadly, also 7 slaves.

We learn that Amersham on the Hill sprung up in the late 1800s, with the advent of expanded rail travel.

Today, 27 miles out of London, Amersham is still considered part of the commuter belt, on the Underground service. And why not. One could work in London, commuting daily to enjoy old world charm. 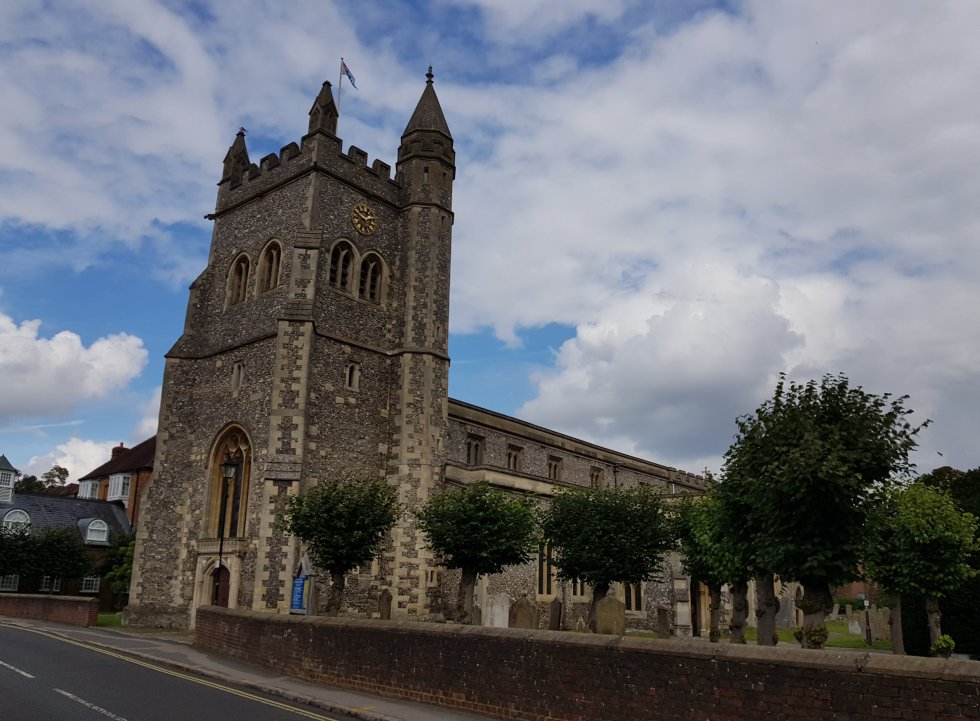 and a pretty main street,

backing on to a chalk stream and commons.

Given its location Amersham was, in the 1700s, a transit resting point enroute to London. Evidence of coach houses and inns are dotted along the main street. See the high entryways?

They were to drive your horse and coach through. Horses would be swapped while you slept nearby, ready for a new day’s travel with a fresh team.

We also learn that the brick frontages on these houses was a later additions in a modernisation excercise in the late 1700s. The houses were originally timber framed as per the example on the right, above.

We’re glad we had the opportunity to see Amersham – it seems the internet doesn’t lie after all. Old Amersham: tis truly lovely. 😉