Talk about an action packed day.  Chris wakes me to the news that there’s a dolphin feeding in the bay.  It’s a bleary eyed dash (damn those bright night skies) to the fjord shore, binoculars in hand. 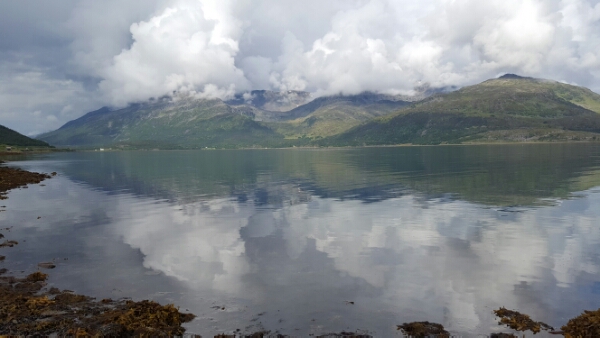 At ground level, the fjord is glass still other than where the kittiwakes and enormous black backed gulls are taking advantage of the dolphin’s cast offs.  Fish are being encircled, jumping out of the water to get away, only to find snapping beaks waiting. Rough life being a fish then.  It’s a tiny dolphin, less than a metre it seems.  Chris saw it leap out of the water fully earlier, but I only see a fin emerge here and there.

In the excitement, I’ve missed that our shore is not seaweed and rocks, but tiny mussels – millions of them, closed against the receding tide.  No wonder the oyster catchers on the shore are happily busy.  Our dolphin is joined by a larger one (mother maybe?) and the cacophony of birds, fish and dolphins starts again.

Chris is itching to get moving so there’s only time for a quick pat of a little sausage dog who’s stopped by, then we’re off.  As we drive along the fjord we see others fishing and the occasional fin or tell tale water wake and birdy chaos.

The morning started sunny but we’re driving into a storm.  Fluffy white and ominous black clouds share the sky. A summer shower decends through the sunlight, creating a rainbow over the fjord.  Quite by chance we’re stopped when it emerges and we can see it from end to end over the water.  Rainbows are flatter here, not as arched as at home. It clearly is the effect of the longitude, the details of which are a later question for Google.

The Norwegians love a good bit of road and tunnel building and this section of the E6 is no exception.  Much of the area is under construction and we pass at least three new tunnels in progress.  At one of these, we stop for lunch.  Not great view but one of the few places we are able to, in amongst the road works.

It proves a fortuitous choice.  As I’m working the crispbread I hear Chris shout “reindeer!”. A herd of reindeer have jumped off the clifface onto the bitumen and are pelting down the road.  This is domestic herd: the two lead males wear bells.  Traffic slows and works around them.  I go into photo frenzy.  Moments later three more fly out and I finally have the wherewithall to video them.  Much happiness.  Love the reindeer and that they roam about freely with their fuzzy antlers. Desperate to pat them, especially the fuzziness.  Much squealing and excited chatter on my part for the rest of the day, to Chris’s amusement. 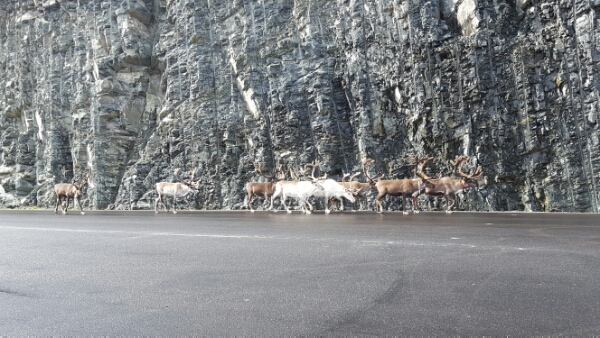 The reindeer are a complete bonus.  Our focus today is the museum at Alta.  This is a pretty special site, with rock art, ie, rock carvings, dating back to 5,000 BC to 2,000 BC. It was discovered by accident in the 1970s but is now a UNESCO protected site.  It’s pretty awesome.  The oldest art is high on the mountain, at sea level when it was carved, before all the glacial ice from the ice age had melted.  The work is navie art at its best.  Stick figures are drawn front on.  They hunt, sail and are shown in ceremonial pursuits.  Animals, bear, reindeer, elk and even a hare are shown in profile as are boats, more complex that one would have thought for the time.  Some of the older work has been painted in ochre, since frowned upon and is being slowly restored. 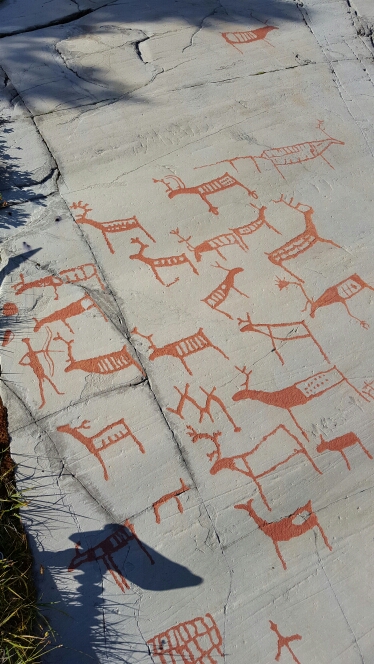 The newer work is much lower on the mountainside, and on the other side of the harbour, linked by a walkway through the forest.  This work is more sophisticated, but there is less of it.  Fertility is depicted, women giving birth, pregnant reindeer and other creatures.  Boats start to look like modern designs, a few thousand years later.  The work then stops, without explanation. 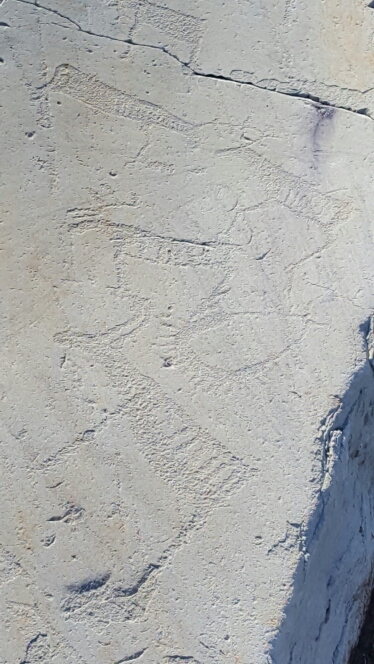 It’s quite satisfying, seeing ancient man depicted going about their business, their focus not much different to ours today.  Most fabulous are the bear footprints carved into the rock, shown moving through the three worlds that were believed in at the time – the spiritual, the earth and the underworld. It was believed bears could move freely between the three.

These carvings were originally made in ferrous rich rocks – they would have stood out white against the red rock when first done.  Where’s a time machine when you need one?

It rains partway through our tour making some things a bit tricky to see, but we manage.  There’s a display inside too, tracking migratory patterns of birds, slate production and other stone age artefacts from the area.  Well worth the visit.

Despite it being quite late in the day, Chris feels he still some miles left to go up the E6.  This new stretch of road takes us deep into Finnmark, into Sami lands with the occasional teepee.  It’s an unusual landscape, open grassed plains and hills as far as the eye can see, with very little water, just the occasional stream.

NordKapp eludes us again.  It’s just too far to do in what is left if the day.  We spend the night on the plain, the night even brighter than before, slashed by bright reds with what there is of a sunset.

The most exciting news of the day, despite reindeer, rainbows and art that’s many thousands of years old, belongs to our friends Breigh and Andy who welcomed their first born into the world, a boy.  Welcome to the world little one.  Despite our flaws and the damage we’ve wrecked upon it, it’s still a wonderful place. You’re going to love it.